Looking Back: Sandidge, Drake, Birdsong appointed to college board 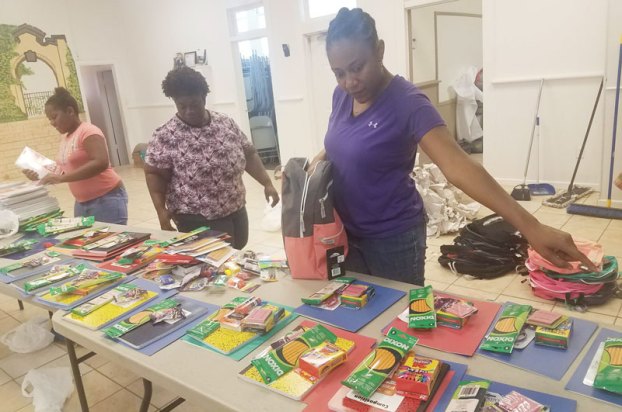 Courtland residents give back to one another

“I just want to give back to the community” was the sentiment that emanated from all those who desired to positively influence the lives of others in Courtland and the surrounding areas.

Every August for seven years, Denise Ricks and her crew have worked tirelessly to provide school supplies, entertainment, food, prize and good old-fashioned fun for families at the Courtland Community Center.

Denise states that she could not have done it without her faithful squad. Mrs. Gloria Knight loaned her support for five years and was instrumental in getting the drive off to a strong start. Her mother, Marynette Ricks; aunt, Adelle Ricks; cousin, Troy Ricks; and nephews, Jacquon Williams and Jamelle Benn, have been working side by side to make her seven-year event a success. Besides family members, Ricks has a dedicated group of friends who have also been on the seven-year stint: Tencia Shearin (Total Business and Personal Care LLC); Nichole and Robchel Williams; James and Patricia Whitfield; Tymeka Jackson; and Andrew, Derell and Sharon Boone, (the grill masters). This year, Takeda Hinton joined in to help with the activities. Sweat Realty Group of Franklin have participated for the last two years.

Next year is already in the works.

Kurtz Kutz Barbershop was a hubbub of action. Kids were given free haircuts by Kurt Evans, the owner of the shop. Tonya Claude of New Image Beauty Shop added her services by washing and blow-drying hair alongside Kurt’s wife, Dianna and his daughter, Janae, who also donated a haircut. Dianna and Janae kept things afloat throughout the process. Keith Holloman, a local resident of Courtland, paid for 10 haircuts. Pastor Anthony Rawlings of Celebration Church in Franklin provided transportation for children living in Southampton Meadows. While the participants were getting haircuts, they could pick up toothpaste, tooth brushes and Gatorade donated by Charlie Williams of Williams Florist. Otis Turner furnished and grilled hotdogs right on the property. Kashif Carter, who has a line of Speak Life tee-shirts, demonstrated what his slogan meant by a donating money for shoes.

While all of this was going on at the barbershop, a two-day community day was funded by a group of “corn holes junkies” who just wanted to have the community to come together. No better way to come together than over food, corn hole, music and a bounce house for the kids. There were 15 meats cooked on the premises, which included goat, pork, chicken, fish, crabs, hot dogs, hamburgers and two types of sausages. Side dishes served were jambalaya, string beans, boiled potatoes, pasta salad, mac and cheese, corn and string beans. Planning, organizing, cooking, hosting and cleaning was done by a 25 member crew. This feast took place on the cozy lawn of Darren Grant and Gail Knight. The food was outstanding and the fellowship was great.

This article was written after I learned that these great things were going on right under my nose. They did not do it for fanfare or self-grandeur. Charlie Williams phrased it this way “I’ve been blessed and I want to bless others.”

This is written to thank all you who gave of their resources, time and efforts.

“The greatness of a community is most accurately measured by the compassionate actions of its members.” – Coretta Scott King.