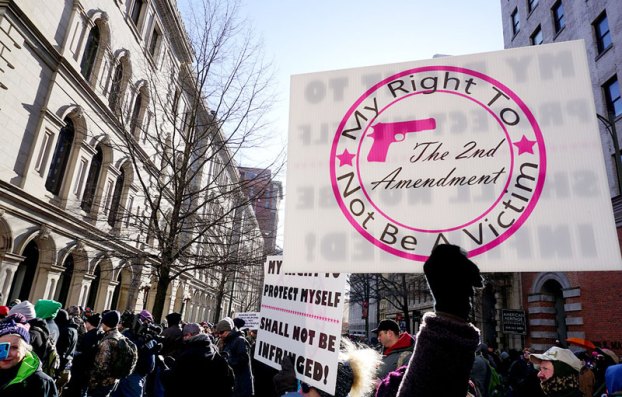 A woman holds a sign in support for Second Amendment rights outside of the Capitol on Lobby Day. The frigid weather, with morning temperatures in the mid-20s, didn't stop the throng of supporters from showing up early. -- Courtesy Jeffrey Knight Capitol News Service

A controversial bill banning assault firearms passed the House this week along party lines, and after several amendments whittled away at certain requirements that had caused the loudest opposition.

The House of Delegates passed HB 961 this week 51-48, which bans the sale of assault firearms and other firearm accessories. Sponsored by Del. Mark H. Levine, D-Alexandria, HB 961 is one of the many gun control efforts being introduced this session and backed by Gov. Ralph Northam.

The bill has been amended several times, and because of this Levine believes that lawmakers have reached the best compromise. Levine also said he wants to counter misinformation being used by pro-gun groups.

“There have been a lot of scare tactics being used,” Levine said. “No one is going to send the police to kick down your door to take away your firearms.”

Amendments to the bill include striking the requirement that current owners of firearms categorized as assault weapons register them with the state police. Also removed was a section that banned suppressors, also known as “silencers.” Originally the bill required that the suppressors be destroyed, moved out of state, or surrendered to law enforcement by January 2021. Now the bill only restricts future sales of assault firearms and suppressors.

The bill in its current form would ban the sale and transfer of new assault rifles, as well as restrict the size of a magazine’s capacity to 12 rounds. An earlier version of the bill would have made possessing any large-capacity firearm magazine a class 6 felony violation, but that penalty was amended and reduced to a class 1 misdemeanor.

“I have been talking to and listening to the concerns from law abiding citizens,” Levine said. “I have also worked with my colleagues across the aisle; Sen. Amanda Chase was instrumental in helping with these amendments.”

Former Arizona congresswoman and gun control advocate Gabrielle Giffords on Monday urged Virginia lawmakers to “act with courage,” in a statement released the day before the vote.

Statewide opposition has swelled in response to proposed gun control legislation that the Democrats promised after gaining control of the General Assembly and the governor’s mansion for the first time since 1993.

Philip Van Cleave, president of the Virginia Citizens Defense League, is a leading voice against the gun control bills that have been introduced.

“We will be working to kill the bills that crossed over,” Van Cleave said. “Expect VCDL to have a presence in all the subcommittee and committee rooms on gun bills, we will fight hard to stop it in the Senate.”

Van Cleave and the VCDL held a massive pro-Second Amendment rally on Jan. 20, that drew over 22,000 people to Capitol Square and the surrounding areas. Northam declared a state of emergency before the event, citing concerns over safety and threats of violence.

Van Cleave said his group hasn’t planned another rally but that is something that could change on short notice.

“We are watching the gun bills,” Van Cleave said. “What happens with those bills will have bearing on our next move.”

With Levine’s bill inching closer to becoming law, many gun store owners statewide have reported an uptick in sales from state residents buying anything that would be banned under the bill.

Eric Tompkins, owner of Paladin Strategic in Mechanicsville, said that the legislative gun control push has helped sales at his gun store, but predicted that his business probably won’t last if HB 961 were signed into law.

“It’s been a double-edged sword, because the past few months since the election have been great,” Tompkins said. “I have had a ton of customers each day, but I know that’ll drop off, and I don’t know whether my business will continue.”

The bill now heads to the Senate. Firearm bills passed earlier by the Senate include SB 70, which requires a universal background check when people sell firearms. SB 69 limits handgun purchases to one a month, while SB 35 allows localities to ban firearms in a public space during a permitted event. SB 240 allows authorities to take away the firearms of someone deemed to be a threat to themselves or others, a measure known as a red flag law. SB 543 makes background checks mandatory at gun shows.