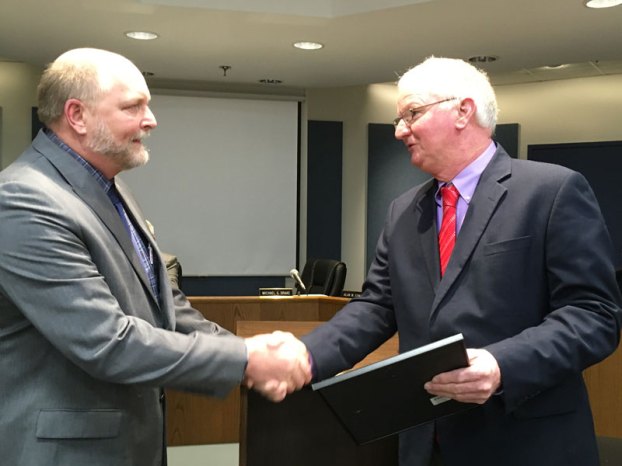 At left, Robert White shakes hands with Michael Drake, chairman of the Southampton County Planning Commission. White had served on the panel for four years until his November election to the Board of Supervisors required that he step down. A resolution was created to honor him for his service to the county. -- Stephen H. Cowles Tidewater News 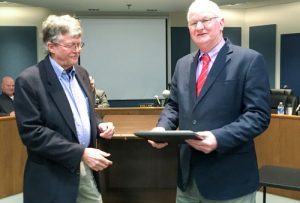 Per the request last month of the Southampton County Board of Supervisors, the members of the Planning Commission began their review of the 2018 utility solar ordinance during last Thursday’s meeting. This discussion was initiated by Dr. Alan Edwards, board chairman and also liaison to Planning. He had been getting several requests by county residents for Planning to look again at the guidelines.

Beth Lewis, secretary to the commission, noted that night that the proposed 39 acres at Flaggy Run in Courtland “met all the requirements [in the ordinance] but still did not gain approval.”

The following are some of the observations made by the commissioners.

Referencing an article in The Tidewater News about Isle of Wight County School board awarding a solar contract, commission chairman Michael Drake, panel chairman said, “I just don’t think we’ve explored [this issue] enough. What could those future projects do for us? The only ones to benefit are the so-called landowner.”

Jack Randall, vice chairman, said, “The more research I’ve done, the more concerns I have. The ordinances might have boxed us in by taking away our discretion. Why did we go through doing an ordinance? Has any other locality done [an ordinance] and repealed it? Is that an option of Southampton County Planning Commission?”

Richard Railey, county attorney, said, “First, any ordinance — especially a first one — is a work in progress. You’re always trying to make it better … We need to develop an ordinance that’s fine-tuned. I think. Is it perfect? No, it’s not. Can it be better? Yes.”

“Our ordinance mirrors it almost to a T. The only thing that jumped out is protection of farm land and and distance from a town,” she said, adding that to strengthen it, Planning needs to be proactive.

“Personally, I don’t think we should ban them [solar farms]. We need to find the right balance and be part of the next generation of renewable energy,” said Allston.
Edwards concurred, and said, “This [2018] ordinance was born out of fear about what Richmond was going to tell us what to do. I think we can improve on that.”

Edwards continued, “Farming is our No. 1 industry and is probably going to be for a long time. I’m not sure anyone’s shown me benefits [of solar power.] It’s expensive and the power is going elsewhere. I’d hate to find out we made a mistake later.”

Commissioner Michael Mann asked, “Why use your tax dollars to have to buy back electricity? I can sleep without lights, but not a hungry stomach.”

Drake noted that the biggest complaint he’s heard is that some solar site are close to highways. At time no ordinance existed.

“It’s very intrusive to homeowners who’ve lived there the past 10 to 12 years,” he said.

Allston suggested that “maybe there are areas we need to look at that are more isolated.”

Railey said that the county has “suffered by not having an engineering staff” to guide the board and administration.

Commission Bill Day said he’s heard that the value of solar panels are going to be considerably worth far less than what they are now.

“I’ve a feeling they’ll end up in a dumpster,” he said.

Randall added that whoever decommissions them “will have to have some recycling expertise. It ain’t going to be cheap.”

Allston then recommended a definition about what is a solar project. For example, size and location.

Randall acknowledged that his vote for the Newsoms project was a mistake.

“’Win-win’ we heard. But how much commercial development has happened,” he asked. “No one want to live next to one. So we voted against Flaggy Run. They got me once, but not again.”

For now, the commissioners have decided to put the topic on their agenda for next month

Chesson suggested a joint workshop, which Drake supported and said, “We’ll come up with ways to make suggestions later this spring or summer.”
After their talk, some residents offered their views, beginning with Terry Dudash of Freeman Road. He opposes establishing solar farm within agriculture districts and especially in neighborhoods. Dudash noted the proposed one in Ivor.

“I didn’t build my house to see that [solar panels],” he said, adding that the land would never return to the way it was after the panels have been on site for a few decades.

The aforementioned project in Ivor is for approximately 1,000 and would be built by Recurrent Energy, which has hosted two open houses in the town.

Dudash did not name the company, but said it won’t have to pay taxes on the land, and that there are no permanent local employment opportunities.

“The few employees will likely be from elsewhere,” he said. “The company will destroy this soil. To put this in our county is the most unpardonable sin we could commit. I hope they don’t think we’re pushovers.”

Joe Vick followed, stating “It would be good to have a blueprint of where we want them (panels).”

Further, “The last thing we need is an invasion. Not just invasive plants, but animal species,” and reminded listeners of Blair Bunn’s statement of trees that were brought in for landscaping at the Newsoms site. Bunn stated they contained fire ants, which he is still combatting to keep under control.

Colleen Flick of Wakefield shared her website, which shows what happens to panels as they age and what metals and elements are used in panels.

Mike Castro of Ivor asked what would be used to clean the panels and who would pay for the water? He also said he got three different answers to questions about acreage during the open house in January.

Bob Wallace of Freeman Road said, “Catastrophic claims doesn’t do anybody good. It’s impossible for us to accurately predict when it comes to decommissioning.”

John Bryant suggested that panels should be put on already unproductive land.