The 4th District Commander for the Virginia Department of American Legion is spreading the word about the organization’s newly expanded eligibility and encouraging all eligible veterans to become members. 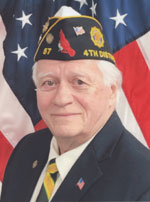 Joseph E. Garlitz is the 2019-2020 4th District Commander of the Virginia Department of American Legion.

“I encourage each and every veteran to seek out the post near them to join and get yourself on track toward receiving your veteran benefits you have earned,” Garlitz said.

Every post is deeply involved in its community, providing time, talent and treasures.

“But we take care of our individual veterans first and foremost,” he stated.

A big change in membership eligibility was made in 2019.

“Unfortunately, we had veterans that were unable to join the American Legion, but that was rectified last year by the 2019 Legion Act,” Garlitz stated.

“The passage of the Legion Act is a welcomed acknowledgement of all veterans who gave the same oath to protect and defend our country between the designated wartime periods,” said A.B. Brown, commander of the American Legion’s Department of Virginia. “Hostile military service conditions existed outside the stated war periods, and this bill was long overdue. It recognizes the once excluded veteran population (and extends) the opportunity to join the American Legion along with the advantages the American Legion offers and represents. We thank Congress and the president for its passage.”

Now that the legislation has been signed, the American Legion’s eligibility criteria immediately changes from six eras to two — April 6, 1917 to Nov. 11, 1918, and Dec. 7, 1941 to a time later determined by the federal government. No other restrictions to American Legion membership are changed.

Many of the previous gaps were during the Cold War, when an estimated 1,600 U.S. servicemembers were killed or wounded in hostile operations.

“In summary, if you served honorably, on active duty, since Dec. 7, 1941, you can pursue membership in your community’s American Legion Post, and I fully encourage it,” Garlitz stated.

TRACY AGNEW is editor of The Suffolk News-Herald. Contact her at 539-3437 or tracy.agnews@suffolknewsherald.com.