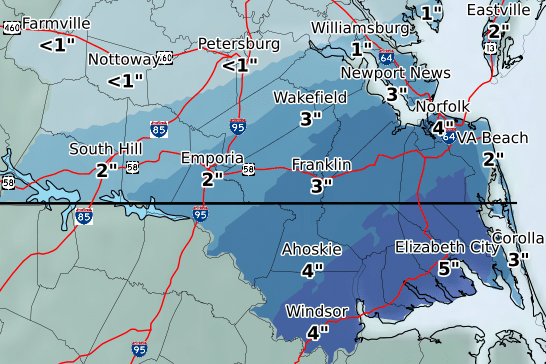 The following schools have announced schedule changes as a result of Thursday’s snow forecast:

• Franklin City Public Schools has rescheduled tonight’s school board meeting and public hearing on the division’s proposed 2020-2021 budget for Thursday, Feb. 27. The meeting will be held in the City Council chamber of City Hall, located at 207 W. Second Ave., Franklin. A closed session will begin at 6 p.m. with an open session following at 7 p.m. The public hearing will begin following citizens’ time.

• Isle of Wight County Schools has cancelled all after-school activities for Thursday afternoon and will not be sending any students to the Governor’s School for the Arts today.

• Isle of Wight Academy‘s girls basketball game versus Denbigh Baptist Christian School will now start at 3 p.m. today at Stonebridge School. The Isle of Wight Academy versus Broadwater Academy boys basketball game will now start at 3 p.m. at Atlantic Shores School. The games are part of the first round of the Metro Conference Varsity Basketball Tournament.

As of 11 a.m. Thursday morning, the National Weather Service’s Wakefield station is forecasting between two and four inches of snow accumulation for the Franklin area, beginning sometime late this evening. There is a chance of rain between 1 and 4 p.m., then rain and snow, with temperatures falling to around 33 degrees by 5 p.m. Chance of precipitation is 80 percent, with total daytime snow accumulation predicted at less than half an inch. The chance of precipitation will increase to 90 percent this evening, with a low around 26 degrees.

The NWS has issued a winter storm warning for the city of Franklin, Southampton County, Isle of Wight County and the surrounding areas, beginning at 3 p.m. and continuing through 7 a.m. Friday. In addition to the forecast of two to four inches of snow, north winds are expected to become gusty to 30 to 40 mph tonight, especially at the immediate coast.

The NWS advises motorists to plan on slippery and snow-covered road conditions during commutes this evening and Friday morning as temperatures drop to or just below freezing.