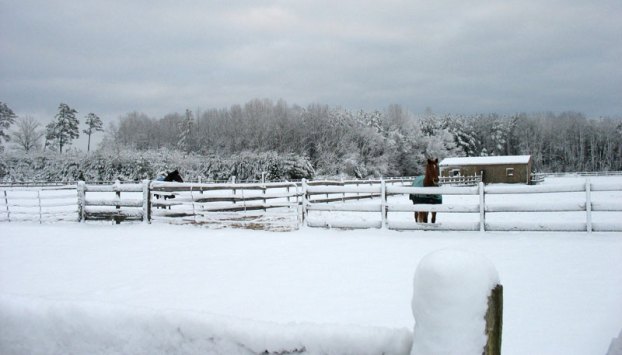 Chuck Gayle of River Birch Farm in Courtland submitted this photo of his blanketed horses. The farm is just across from Riverdale Elementary School. Gayle wrote, "Although the lights flickered a few times last night, we didn't lose power like so many others. Wouldn't mind if it all melted away quickly, so the horses can get back to grazing the pasture grasses instead of devouring expensive hay." 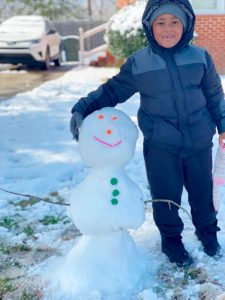 Chantz Butler, 5, of Franklin, didn’t mind having a day out of school to play in the snow and make a new friend. — Submitted

The snow that fell on Thursday afternoon and night — 5 inches each in Franklin and Courtland — did more than just decorate Western Tidewater with powder or close schools for Friday. Several reports have come in about accidents and power outages throughout the area.

Capt. Tim Dunn of Franklin Fire and Rescue, spokesman for the City, said the department started to respond to one motor crash on Thursday, but which turned out to be in Suffolk, so that city’s responders handled the matter. Other than that, Dunn said, “there were no injuries or crashes that were reported to us.”

He added that there six types of calls about power lines being affected, such as several tree limbs touching the lines and causing arcing of electricity. Dunn said Franklin Power and Light was being kept busy going from one call to the next, but did not have numbers of how many residents or businesses were without electricity.

FP&L Engineer Jeff Dodson said, “We had had 550 customers out at one time, all related to tree limbs falling on power lines. Many lines were pulled loose from the houses. Most were in Holy Neck, South Quay and Isle of Wight County, not a whole lot in Franklin.”

He added there were some outages on Meadow Lane and Sycamore, but those are now back on. As of 12:30 p.m., there were 50 customers still out in the city — one or two here and there, where transformers have to be fixed.

“There were lots of limbs on power lines,” said Dodson. “We’re hoping the snow melts. Heavy wet snow pulls limbs down and causes fuses to blow. We have not seen any broken poles.

“We’re hoping to have everyone on by dark.”

Wayne Albright, a meteorologist for the National Weather Service in Wakefield, said that in addition to the Franklin and Capron numbers, he figured that 4-1/2 to 5 inches fell in other localities such as Boykins, Drewryville and Capron. Windsor got 3.3 inches, and 3 inches in Zuni, and Suffolk saw 4 inches of powder. Albright explained that the information is gathered through such sources as public media, trained spotters and even the Virginia Department of Transportation.

Lt. E.L. Parsons of the Southampton County Sheriff’s Office emailed the paper and stated that from 8 p.m. on Thursday to 11 a.m. on Friday, the department and/or fire units responded to the following:

As of 2:30 p.m. on Friday, the online outage map of Community Electric Cooperative (www.comelec.coop), based in Windsor, showed 30 customers in Isle of Wight without power being served; 102 in Suffolk.

Based on the online outage map at www.dominionenergy.com, as of 3:20 p.m., company crews were responding to 506 customers without power in Southampton County, and 97 in Isle of Wight County.

As of 3:20 p.m., the online outage map of Community Electric Cooperative (www.comelec.coop), based in Windsor, showed 864 customers in Southampton County without power being served, and 31 in Isle of Wight.

Also in Isle of Wight, the county sheriff’s department spokesman, Lt. Tommy Potter, reported, “We did have several downed power lines, mostly due to fallen trees or limbs. Also, several vehicle crashes as well, some involving tractor trailers. However, as of this morning, most primary roads are in good shape and the secondary roads are slippery in mostly the areas covered by trees and shaded.”

Sgt. Michelle Anaya, spokeswoman for the Virginia State Police told the paper via email that since 2 p.m. Thursday, the VSP had worked six motor vehicle accidents/property damage only in Franklin/IOW area, but these were described as being “nothing major,” i.e., without injuries or loss of life.

She added, “Troopers have not completed the accident reports as of yet, so I can not definitely say if an accident is weather related or not as of yet.”

There was a hog truck that overturned at 10:30 p.m. on Thursday on Route 258 between Bob White and Harry Wilson roads, both within the vicinity of the county’s government and courts complex. That had required a detour, which was still in place until 6 a.m.

Windsor Police Chief R.D. “Dan” Riddle said there are no known accidents in Windsor caused by the snow.

“We were unscathed,” he said, adding that officers did help the county with other incidents.

There had been a cable line, not a power line, which fell on Church Street in Windsor.

Riddle said that overall, “We dodged a bullet.”