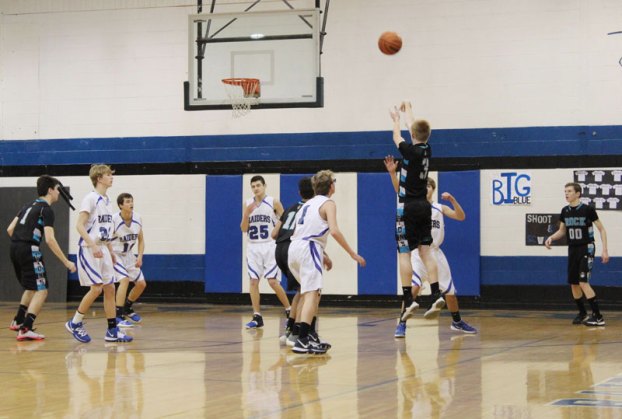 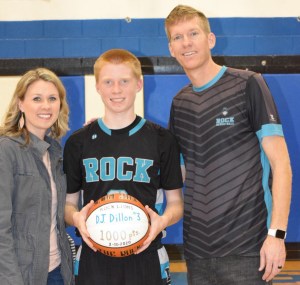 D.J. Dillon with his parents, Jill and Danny Dillon. The Rock Church School student earned his 1,000th point for the Lions’ basketball team in the beginning of February.

Rock Church Lions finish their season with a record of 11 and 3. The Lions continue to be a strong program as they finished last year with 19 wins and no losses. Rock basketball has a four-year overall record of 47 and 9. These games include JV and some Varsity level games, even though they don’t have any players past the 10th grade.

“We are trying to build a program from the ground up. [We] Started at fifth and sixth graders and now we play varsity and JV,” said Coach Danny Dillon. “ I’m excited that we are getting older and more experienced so we can play at a higher level.”

The Lions closed out with an impressive win versus Suffolk Christian Academy by a score of 46-27. Each player from the team scored: Cole Butler 4; Luke Blythe 10; Benny Dillon 2; D.J. Dillon 14; Justin Temple 6; and Christian Fanjul 10. The top two scorers of SCA were Smith with 11 points and Dealer added 6.

The win was a little overshadowed by Rock’s previous game versus Southampton Academy. In early February, D.J. became the third person in the history of the school to reach 1,000 career points. 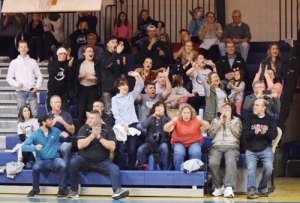 The 1,000th point shot came in the second quarter versus the Raiders. Dillon, a freshman, came down and crossed a player over at half court and pulled up just outside the free throw line hitting nothing but net. The fans from Rock Church, which were strong in attendance, began to cheer loudly. The buzzer sounded and the coach with the rest of the tea, presented D.J. with a 1,000th-point ball.

Southampton Raiders staff was very influential in making this a special moment for D.J. and the Rock Basketball team.

Coach Dillon said, “What can I say, D.J. is gifted and works hard at his game. God has really blessed me in allowing me to be a part of his career as a father and a coach. But I’m more proud of the son that is 10 times better off the court than he is on. He’s always looking out for and serving others. Basketball talent will only take you so far — loving God and others will take you into eternity.”

D.J. finished the season averaging 30.3 points per game which is the second best in school history.

The Rock Basketball team is making great strides and they’ve done it without having access to their own gym. As they open the Ben S. Dillon Life Center this spring, it will help take basketball at the Rock to higher heights. They also plan on doing several basketball camps — and possible volleyball camps — this summer in addition to their soccer camps. The future indeed is bright at the Rock.