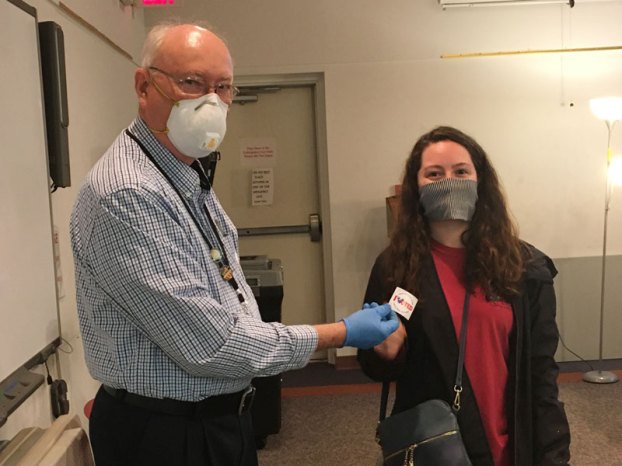 Britton Culpepper presents Sara Woodward with an "I voted" sticker after she cast her ballot for Ward 2. -- Stephen H. Cowles The Tidewater News

In spite of rain and a pandemic, voters still showed up to make their choices on Election Day.

Mark Kitchen and C. Ray Smith will join Franklin City Council when they’re sworn in before or soon after the new fiscal year on July 1. They will represent wards 1 and 2 respectively, formerly held by Benny Burgess and Barry Cheatham, who chose not to seek re-election.

He said on Tuesday evening, “You’re never confident ’til the last votes counted,” adding his commendations to Bailey. “She ran a nice campaign and got a considerable amount of votes.”

Bailey said later, “I did have a good race! I was very, very surprised. Very pleased. I’m not a politician. Nothing was pre-planned. I’m very proud. I’m really OK. I made a little history. I stood up and gave a choice.”

She will continue to follow council, especially since her business is downtown.

As for the next election? Bailey added that if she’s asked to run, “I might,” then added with laughter, “but don’t ask me at the last minute!”

At the Ward 2 voting site in the Ruth Camp Campbell Library, voting official Stella Bradshaw said that voting had been steady all day. “Enough to keep us busy,” she added.

With Kitchen and Smith will be incumbent Linwood Johnson of Ward 4. He got 66 votes (53.23 percent) versus his challenger, Henri Porter, who had 58 votes (46.77 percent).

Johnson said in reaction that he feels “Great! Great! I’ve some unfinished business to continue getting the city to move forward, as well as helping the ward with more jobs, better economic and getting empty buildings filled with businesses.

“I’m very very grateful to those who voted in a time of pandemic. For those who met the challenge, I’m appreciative to them. For those who didn’t vote for me, I’m still their councilman and will serve them as well.”

Porter congratulated Johnson and his team on their win.

“I want to thank my beautiful wife (Oralen) and my campaign manager, Marcellia Faltz and my team,” he said. His gratitude extended to spiritual advisors pastors Jeremiah Cole and Michael Whitting, as well as his own pastor, the Rev. Anthony Rawlings.

“I will continue my quest to be a voice for the people of Ward 4,” said Porter. “And I will do anything to help move the ward and city ahead.”

As with all elections, these results are unofficial until the Franklin City Voter Registrar Jennifer Maynard can confirm the numbers.

The same holds for Southampton County, according to its Voter Registrar Lynn Burgess, who said,

“Voting is always light in Southampton when it comes to town elections.”

But as of press time, results had not yet been posted to the state board of elections. These unofficial results are as follows:

Family comes through two storms — together

Dominion: Outage may continue through Thursday

City tax shortfall not that bad

Accident on 460 results in fatality