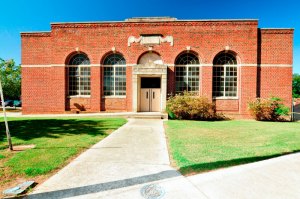 The Charles Street Gym in Franklin has been recognized for its lasting value by the Department of Historic Resources and included as one of 16 places to merit listing on the Virginia Landmark Register in 2019. The approval came during a quarterly meeting on Dec. 12 in Richmond.

Much of the work done to get the site on the list can be traced to Clyde Parker, a lifelong resident with an obviously strong interest in regional history.

Seeing the three-step application process to completion — he began in 2016 – is both a source of price and relief to him. Parker met with a committee in Richmond that could make the recommendation to the VDHR. More discussion took place in Lynchburg at a different time.

The application notes that the building is “one of the few historic public buildings remaining” in the city.

The nomination form gives this description: The City of Franklin built the Charles Street Gym in 1935-36 with funds from a Public Works Administration (PWA) grant, which covered 45 percent of the construction costs, and a loan for the remaining costs from the Literary Fund of Virginia. An important component of the city’s public education history, the building provided Franklin high school students gym space for physical education, an industrial shop and an agricultural classroom in the rear. The PWA and state architect Raymond V. Long recommended the building’s Classical Revival design from plans drafted in 1935. An integral part of the city’s high school complex, Franklin used the building from 1936 to 1966, after which the gymnasium space became a secondary recreational venue for community basketball … .”

“I’m a graduate of Franklin High School and played football and used the gym,” he recalled. Parker added that the back part was used as an industrial arts shop and place for classes in agriculture.

One of the factors that has aided the site to its new status is that the gym has kept its historic integrity. That is, there have been no major alterations to the facade or interior the detract from its look or function.

Highground Services in Franklin did an evaluation and found it to be “pretty solid,” according to Parker. That includes the tiling, roof, floor and windows. The gym does need what he called some “cosmetic work,” but that’s a separate issue.

“We’re in a much better position [to get money for such work],” he said. “We need to show strong community support. We have an opportunity to save the gym.”

There had been a move about 20 years ago to tear down the site. Thankfully, people such as Lynda Updike of the Southampton County Historical Society and Teresa Beale of the Franklin Southampton Chamber of Commerce went to bat and argued for the site’s preservation. It has since been regularly used by Franklin High School for its wrestling team and robotics program. The city also uses the back part for a maintenance shop and storage.

Liz Burgess is another champion credited by Parker. “She is a strong advocate — very passionate. She stimulated me to get back involved.”

There is the hope to install a plaque or erect a sign highlighting the gym’s significance for all to see.