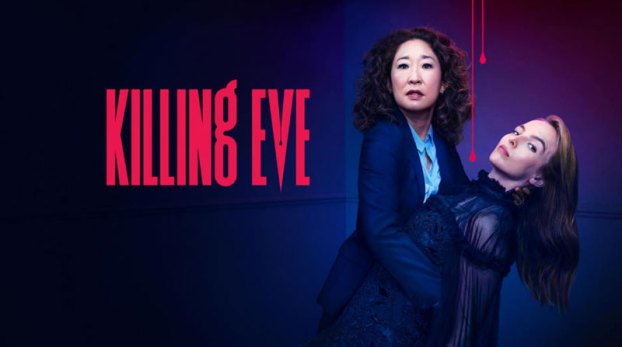 How’s everyone holding up in the quarantine? I, for one, have been spending a lot of time watching movies and television shows that I love and discovering new ones to keep me entertained and help feel less bummed about these terrifying times. I find it a lot better for my mental health to limit the news intake and instead settle in with my favorite actors, filmmakers, and stories to take my mind somewhere else. So, I decided to write down some of my favorite free quarantine movie and television recommendations.

In honor of “Killing Eve” returning to our screens, I have decided to focus this recommendation list on Hulu! Of course, this is an incredibly small list, and I tried to include something for everyone, so if you are looking for more personalized ideas, feel free to hit me up on social media (@flickchickdc) or via e-mail at flickchickdc@gmail.com. Hope everyone is staying healthy and safe!

I talked about “Chuck” being my favorite TV show of all time. Well, “Killing Eve” is my favorite show currently on TV (and I watch A LOT of TV). Created by the brilliant Phoebe Waller-Bridge (“Fleabag”), “Killing Eve” is easily the most well-acted and intelligently written shows on television. A psychological thriller, the show is a cat-and-mouse game between a sociopathic assassin named Villanelle (Jodie Comer) and Eve (Sandra Oh), a British intelligence officer trying to stop her. Through their mutual obsession with each other, there is major tension and white-hot chemistry that I am totally here for. And don’t even get me started on the incredible fashion in the show.

Comer is perfect in the role and deserves every single award she gets. I can think of no other actor that is able to cycle through so many accents and change her character’s demeanor from icy-cold psychopath to goofball to obsessed fangirl, all in the blink of an eye. I promised myself I would keep this description short, but please prioritize watching “Killing Eve” ASAP so you can catch up with season 3.

Whenever anyone asks me to recommend an underrated TV show, “United States of Tara” is it. Created by my favorite screenwriter Diablo Cody (who won the Oscar for “Juno”) and executive produced by Steven Spielberg, this series follows a seemingly normal suburban family with a giant secret. Tara (Toni Collette), the matriarch of the family, has dissociative identity disorder … aka multiple personalities. When Tara gets stressed or upset, her personalities make an appearance. And the ones you meet early into the show, may be joined by additional personalities as the series continues.

As I said, Diablo Cody is my favorite writer because her scripts are always so smart, hilarious, and have the ability to really tug at your heartstrings. I always relate to her pop culture references too. Toni Collette is an absolute treasure and one of the best actresses working today; there is no greater representation of this talent than “Tara,” where she gets to play several characters on one television show. I’ll also note that this is one of Brie Larson’s first big roles, so if you are a fan of her, you will appreciate her performance here.

I hesitated to even include this on my list because everyone knows what a great show “The Handmaid’s Tale” is, right? Even so, I want to give another plug for this amazing, though at times hard to watch, dystopian drama that takes place in a United States ruled by a totalitarian, theocratic government called Gilead. Because fertility rates have declined, fertile women are forced to become “handmaids,” made to sleep with husbands of wealthy families whose wives cannot have children themselves. Dark, huh?

I know we are already living in a scary time, so this may be a bit triggering/unappealing if you are looking for more of a light watch. However, this show is really, really good and Elisabeth Moss is absolutely incredible in it. I also want to give a shoutout to Yvonne Strahovski (“Chuck”) who goes toe-to-toe with Moss and along with Jodie Comer (“Killing Eve”) is giving one of my favorite performances on television right now. Another cool element of the most recent season is that some scenes were filmed right here in Washington, D.C., and I went and watched them film!

“Shrill” is another underrated favorite of mine. Based off of a memoir, the series follows “an overweight young woman who wants to change her life, but not her body.” I loved this description on Hulu’s site because I think it perfectly encapsulates the show and is what I love most about it. Of course, the show focuses on weight and does an amazing job messaging body positivity. But we finally get a TV heroine that yes, may be heavier than the lead actresses we are used to seeing, but still faces the same exact problems. Annie (Aidy Bryant) has boy problems, issues at work, and all the other problems plaguing young women these days. It’s crazy that we had to wait until 2019 to see this viewpoint on-screen.

Based off of the 1996 film, “Fargo” is a black comedy, crime-anthology series that picks up with a new cast and new case each season. The first season is set in 2006 and follows hit-man Lorne Malvo (Billy Bob Thornton), whose deception causes mayhem in a small Minnesota town. Police deputy Molly Solverson (the amazing Allison Tohlman) begins to investigate murders that may be tied back to Malvo. The second season, my favorite of the three, is a prequel to season 1 and takes place in 1979. The season centers around a couple (played by real life couple Kirsten Dunst and Jesse Plemmons) who attempt to cover up the semi-accidental murder of a member of a local crime family. And the most recent season — starring Carrie Coon, Mary Elizabeth Winstead and Ewan McGregor — follow a couple that get involved in a double-murder.

Season 4, starring Chris Rock, was supposed to premiere this month but was delayed along with everything else due to the pandemic. So make sure you catch up on the series now so you’ll be ready for season 4!

The best way to describe “PEN15” is a cringe-inducing comedy that will trigger memories of your adolescence. Set in 2000, showrunners Maya Erskine and Anna Konkle (both in their early 30s) star as 13 year old versions of themselves. And you know what? It works. Every 30 minute episode is absolutely hysterical and is sure to bring back some of your similar micro-dramas from middle school. The official description of the show describes this time of our lives perfectly, “where the best day of your life can turn into your worst with the stroke of a gel pen.”

Based off of a 2017 book, this series follows two mothers from vastly different life paths. While the women get along initially, their inherent differences and dangerous secrets may be the cause of exceptional damage in both of their lives. Let’s be real, I will watch anything with Reese Witherspoon and Kerry Washington so that was my starting point with this series. As I am writing this, there are still two episodes left in the series and I am excited to see what they have in store for us.

“Damages” was must-see TV every week at my house. It is a legal thriller that centers on ruthless senior attorney Patty Hewes (Glenn Close), who will stop at nothing to win a case, and Ellen Parsons (Rose Byrne), her fresh out of law school protege. Not only does it have fantastic performances from Byrne and Close (giving her best version of Miranda Priestly from “Devil Wears Prada”), but it is one of the twist-filled television shows I have ever seen and left me guessing from episode to episode. I haven’t seen “Damages” since it aired, but just thinking about it for this recommendation section has made me want to do a series rewatch!

Based on the insane, true story of Gypsy Rose and her mother Dee Dee Blanchard, this mini-series combines two of my favorite things, true crime and Patricia Arquette. I don’t want to say too much about the story because I want you to watch the show and discover it organically. What I will say is it is legitimately one of the craziest true crime stories you will ever hear and it’s no surprise that they turned it into a movie so quickly.

Created by Ryan Murphy (“Glee,” “American Horror Story”), “Scream Queens” is a satirical, comedic slasher series that starts off trying to figure out who is killing coeds at a college in season 1 and moves to a hospital setting in season 2. The whodunnit mystery is secondary to the meat of the series, which lies in the amazing character development. Emma Roberts as Chanel Oberlin is one of the most hilarious and entertaining television characters of the last decade. And in no other series are you going to have THE scream queen herself, Jamie Lee Curtis, gracing your television screen in a truly hilarious, meta performance. “Scream Queens” is so much fun and iconic with my friends and I, we quote it probably as much as we quote “Mean Girls.” Murphy keeps teasing a new season and I would totally be here for it.

LAUREN BRADSHAW is a lover of all movies, even the bad ones. Follow her on twitter @flickchickdc. She grew up in Courtland, graduated from Southampton Academy and doubled-majored in foreign affairs and history at the University of Virginia. She lives in the Washington, D.C. area.