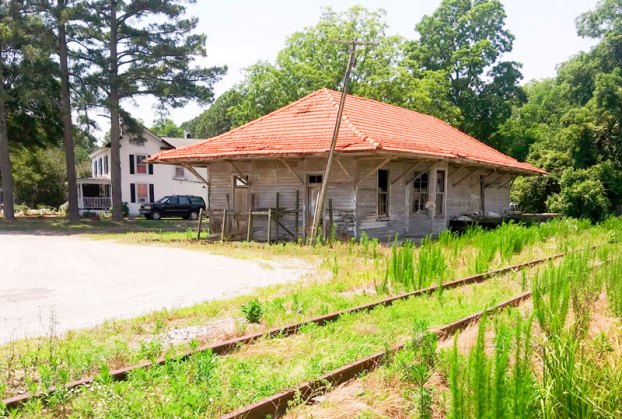 The old railroad depot at Capron. The depot was built in 1888 for the Atlantic & Danville Railroad when the village was named Princeton. The rails, by the way, are no longer used. -- Submitted Clyde Parker

The June 3, 1910, edition of The Tidewater News highlighted and described the burgeoning town of Capron.

“Capron is a comparatively young town, as towns in this section of our state go, but it is as pleasant and thrifty a little village — population 300 — as one may find anywhere. It is composed of a large number of refined and Christian homes — with industrious, law-abiding, and home-loving citizens. It is easily accessible to the outside world — being situated on the Southern Railway with several daily mails, a telegraph office, and an express facility. Besides, it has a long-distance station of the Bell Telephone Company, and of the Courtland and Emporia Telephone Company which is a connection to the Southern States system.”

The community we now know as Capron traces its origins to the completion of the Atlantic & Danville Railroad in 1888. Then, the train DEPOT was named Princeton (named for Judge Prince of Courtland, a vice president of the A&D). In 1889, a POST OFFICE was built and called Cairo. Due to the resulting confusion, in 1890, a single name was chosen: Capron — the last-name of the local railroad agent at that time.

Capron, over the years, has had many mercantile establishments, all of which enjoyed a large trade from the rich farming country surrounding the town. The 1910 article highlighted the following businesses:

L.J. Bain carries a large line of general merchandise, hardware, groceries, etc. with especial attention to peanuts. Also, Mr. Bain employs three warehouses in connection with his other businesses: farm implements, fertilizers, and other agricultural supplies. Humphrey Drewry and E.C. Judkins clerk for Mr. Bain. Mr. Bain is a Southampton County Supervisor from Boykins District, in which the town of Capron is situated; and, besides filling this important position most efficiently, he is well-known throughout our county as a Christian gentleman and man of fine business ability and principles.

Mr. Barham has suffered loss of two cotton gins by fire but will rebuild in time to take care of this year’s crops. Mr. Barham bears the distinction of being one of the best farmers of Southampton County.

“Big Tom Barham” has a heart in keeping with the size of his body; and, his hearty handshake will bring tears to your eyes (unless you can offer a larger hand than he does).

Drewry & Co. is a general store with the genial E.E. Rawlings as its manager. The Capron Post Office is situated in the same building. Mr. Rawlings also serves as assistant postmaster. Capron has two rural routes: No. 1 being served by McCoy Pierce and No. 2 by E.P. Barham. J.H. Wade clerks in the store. Adjoining the store is a hotel and boarding house.

R.L. Burgess & Co. operates a store which opened for business on May 1, 1910. They carry a general line of groceries and dry goods and have quite nice cool-drink equipment.

The Capron Grocery Co. is owned and operated by Mr. A.C. Vick.

Mrs. W.M. Hart has a millinery emporium where she caters successfully to the every-changing fads and fancies of feminine headgear.

Mr. W.P. Gillette, who lives about a mile from the town, runs a general store and is a most successful farmer.

The most important interest of the town is the lumber business of G.W. Truitt & Co., composed of G.W. Truitt, the Suffolk millionaire and vice president of the Farmers Bank of Nansemond, and W.H. Vincent of Capron — a big-hearted Christian, philanthropist, and public-spirited citizen — whose pocketbook is never closed when the best interests of the community, neighbors, and church or school are at stake. The Capron mill, alone, gives employment to nearly 125 people; many others are employed in their timber holdings in Brunswick County. From Edgerton, their own train supplies the Capron mill by way of the Southern Railroad. Mr. G.B. Smith is superintendent of the sawmill in which 40 hands are employed. R.E. Watson is superintendent at the box-mill, which works 66 men and boys. Mr. J.E. Drewry is bookkeeper for the company. His manifold duties, including his interest in another small sawmill near Capron, make him a very busy and useful citizen.

The Bank of Capron, established during the very heart of the 1907 panic, has continually made good and increased its business until it has significant surplus and high-margin profits. The bank’s officers and directors have much to do with its excellent showing. W.H. Vincent is president; J.S. Musgrave, vice president; L.J. Bain, cashier; and Miss Alice Carey, assistant cashier. Directors are: W.H. Vincent, F.P. Grizzard, G.B. Everette, Paul Ellis, J.E. Drewry, J.T. Barham, L.J. Bain and J.S. Musgrave.

Magistrate Frank Barham represents the law in Capron, administering justice without fear or favor; but, because of the law-abiding people of the community, he is not very busy. Dr. G.H. Musgrave, a youthful though skilled physician, has a large practice and is well-liked by everybody.