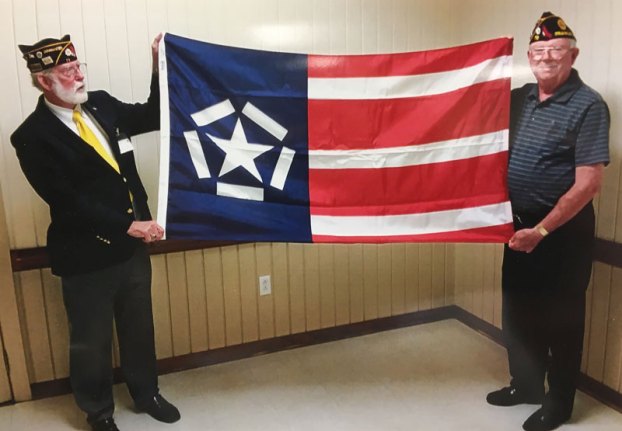 At left and right, American Legion Post 73 Commander David Scott and Chaplain Howard Vinson hold up a Freedom Flag, which will be displayed at the post for one week starting on Sept. 11. -- Submitted

David Scott, commander of the Charles R. Younts American Legion Post No. 37 in Franklin announces that a “Freedom Flag” will be displayed at the post beginning on Friday, Sept. 11, for one week.

“The purpose is remembrance of the nearly 3,000 people who were killed and some 6,000 injured on that day in 2001. In addition, there are hundreds of others who are still are affected by the events of that day. The United States of America must never forget that day,” said Scott.

Scott explained that the design elements of the flag shown above are meant to represent the following:

• The blood shed by those who perished at the Pentagon and the passengers and crew of American Airlines Flight 77.

• The blood shed by passengers and crew of United Airlines Flight 93 that crashed in Pennsylvania.

• The Twin Towers and the blood shed by those who perished at the World Trade Center and on American Airlines fights 11 and 175.

• The heroic actions of those rescue workers, firefighters, police officers, Port Authority employees and many others who worked tirelessly during and after these terrorist attacks.

• The idea that all Americans must stand together to protect our freedoms.

“We must ensure that this event and the rest of American history do not become forgotten. Past and future generations must remember historic events that have caused our country to become the nation we are today,” he said.