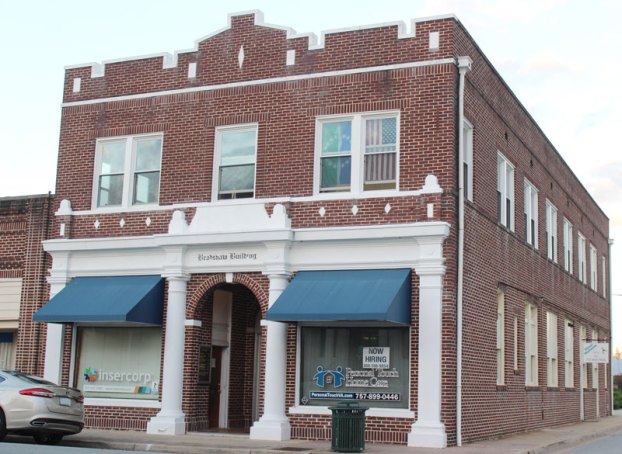 The Bradshaw Building on the corner of Main Street and Third Avenue in Franklin once housed Farmers Bank in the 1920s. The site has since been home to many other businesses within the past century, and continues to thrive with new tenants. -- Stephen H. Cowles | The Tidewater News

The Farmers Bank of Franklin is now occupying its new building on the northeastern corner of Main Street and Third Avenue, the most modern structure in Franklin, having a number of office suites in addition to the commodious quarters of the bank. The building is two stories in height (55 by 86 feet in land area) and is of rough texture brick with front columns, copings, and trimmings of Indiana limestone. It is not only pleasing in its exterior architectural lines but is a model of convenience within.

The bank occupies for its workroom and lobby a room about 33 by 33 feet finished in handsome white woodwork with ornamental metal ceiling, Tennessee marble wainscoting and black metal grills. The bank furniture is of mahoganized birch. The arrangement of the lobby, which has a tiled floor, is a most admirable one, with the cashier’s office on the left as one enters the bank and a ladies writing and rest room on the right. On the Third Avenue side of the room, the space is well-lighted by several large windows and, for artificial illumination, by nine Albo ceiling lights. Just back of the workroom is the vault with 18-inch walls of reinforced concrete. The safe, weighing 5,500 pounds and of manganese steel, was made by the Diebold Company; it is protected by a triple time lock, guaranteed absolutely burglarproof. There are in the vault a number of fire-proof safety deposit boxes for the use of the bank’s customers. In the back of the workroom are the director’s room, storage room, lavatories, etc.

The offices in the new building are so complete in equipment and so conveniently located as to the business of the town and its other public buildings that every room has been rented except one and for that one there is an application now on file.

The corner office on the right is occupied by the Western Union Telegraph Company and is nicely fitted up with handsome new furniture throughout and is most advantageously located to serve the public; H.W. Lloyd is the manager. The corner office on the left is occupied by Dr. E.A. de Bordenave. The entrance to the front offices and to the stairway is kept open at all times and is well-lighted. Old Dutch tiles are used on the front floor. Dr. J.C. Rawls has two commodious offices on the ground floor on the Third Avenue side.

Upstairs, the three front offices are occupied by Dr. W H. Arthur. He has one of the most complete suites for the practice of dentistry imaginable, including a reception room, an operating room, an x-ray room, a laboratory and several other amenities. Commonwealth’s Attorney R.E.L. Watkins has a suite of offices on the second floor, as has W.O. Bristow for his real estate and insurance business and Attorney E.L. Beale, president of the bank. Other offices on that floor are taken by G.W. Pillow, insurance agent; E.E. Edwards, insurance agent; Orpin’s Photography Studio; and J.A. Williams.

The one-story part of the building, fronting on Main Street, is occupied by G.A. Sanderford Electrical Contractor. He has a pretty and useful display of electrical conveniences and accessories.

The building is heated with a modern and improved plant installed by the American Radiator Company. A cleaning service is supplied by an “Arco-Wand” built-in vacuum system. All electrical and telephone wires are concealed and in conduit. Renters are supplied with lights, heat and janitorial service.

The plans for this new and creditable Franklin business house were drawn by William Newton Diehl, the well-known Norfolk architect. E.C. Smith of Franklin is the general contractor; the building is one of the best of his many well-constructed buildings in this town or elsewhere. Other Franklin businesses involved with construction are: W.T. Pace Hardware Co., plumbing; G.A. Sanderford Inc., electric lights and fixtures; and G.M. Whitley, painting and interior decorating. The heating system was installed by M.P. Hooker of Norfolk for the American Radiator Company. The metal ceilings were installed by the Manson-Suter Company of Richmond.

Over the years, the building that was originally known as the “Farmers Bank Building” took on different names and was occupied at one time or another, by many different kinds of businesses. Some people will recall, in addition to the very earliest ones mentioned above, other occupants of the building included, in later decades, Ideal Barber Shop, John Freeman Shoe Shining, Bristow Insurance Corp., Town & Country Beauty Shop, Dr. Darden W. Jones – Dentist, Eldridge Smith Insurance Agency, Daniel K. Peak – CPA, Paul Ryland Camp – Real Estate, Burgess and Rose Accountants and William Rhodes – Attorney.

For years, it was called the “Professional Building.” Later, it was called the “Rhodes Building” and now it is known as the “Bradshaw Building.” In 2014, Timothy Clinton Bradshaw and his father, Joel Clinton Bradshaw III, a retired U.S. Air Force Colonel, purchased the building and restored it. Earlier, in 2007, Timothy Bradshaw had founded a new business in Franklin – Insercorp Ltd., a website design and digital marketing company, of which he is CEO. That business is now the primary occupant of the Bradshaw Building; other occupants include Personal Touch Home Care Services, Sheer Madness Hair Salon, and Andy Rich’s COVA Home Realty.

And, of course, the building is now celebrating its 100th anniversary; and, for all this time, it has been, and continues to be, a major and iconic part of downtown Franklin’s streetscape.

Timothy Bradshaw recently expressed his feelings about the Bradshaw Building and the purpose it serves: “Our tenants are thrilled to be continuing in the history of this truly magnificent building and city. Becoming Main Street businesses provides our tenants with more visibility, allowing further room for growth and expansion, and fostering improvements in quality and delivery of services to their clients. With these companies relocating to the heart of downtown Franklin, it allows them to strive towards their efforts in building a stronger community.”