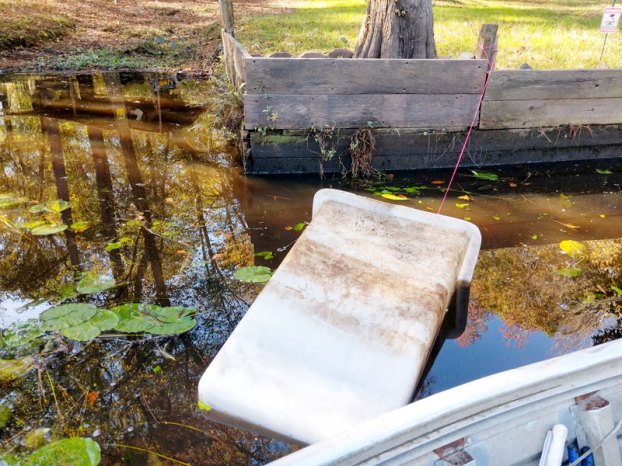 The RiverGuard found a 4 foot by 3 foot bin in the Blackwater River earlier this month. Submitted | Jeff Turner

Spirit of Moonpie and I spent the 7th through the 9th on the Blackwater below Franklin. The water was clear, pretty and 55 degrees. Air temps ranged from 50 to 80 degrees. It was actually a little hot out there. The fog, Lordy! The morning I launched I believe that was the second-thickest fog I have ever encountered on the river in the daytime. I had to just idle along in a couple of places.

The fishing on this trip was not so great, at least for me. I did not fish much the first day because of all the trash I was collecting. However, I did fish most of day 2, but the results were slim. I caught three small bass, a jack and two bream. I tried topwater but had nary a hit. I caught all the fish on a small chrome Big O. I did see one guy that caught five bass using live minnows, and talked to David C., who had caught five on the first day I was out there. So, I guess I was just not up to snuff. Hhhaaaaa. I did not venture upriver from Franklin and I was told the trestle is now blocked. Guess somebody other than me better go get it cleared before it gets too bad. I am not going to be able to clear this time it because of family obligations right now.

The trash on this trip was truly awful. Those high-water events we had earlier this fall obviously scoured the city ditches clean. The river below the Franklin City storm water canal looked like someone had toilet papered it … but with plastic bags instead of toilet paper, which at least would have degraded by now if toilet paper had indeed been used. I also found a huge bin like 4 foot by 3 foot in the river. It took me over an hour to herd that to a place where it could be removed from the river. And also a 55-gallon plastic barrel which, after fighting for a while, was able to get it into the boat. I want to thank a river angel for pulling those two big items out of the river for me. It behooves me to understand where these huge items get into the Franklin storm water ditches. It’s bound to be below Pretlow Street as I can’t imagine these things getting through pipes.

Indeed, the weather on this trip was nice. November summer is an adequate description. Skeeters ’bout took me away, but it was still great. It had been two months since my last patrol and I was very fortunate Freezing Deer kicked me out of the house so I could go get some much-needed time to spend with the river spirits.

I spent a lot of time with the river spirits both nights I was out there, twice performing the medicine dance. I have done this many times in the past for others. This time, however, the ritual was solely for my beloved Freezing Deer, who also has danced on the two rivers we call the Blackwater and Nottoway.