The city of Franklin is making final preparations to host Southampton County’s court functions while its historic courthouse on Main Street in Courtland undergoes a nearly two-year renovation.

“It’s hard to believe that we’re finally at this point,” said City Manager Amanda Jarratt. “It’s been a very painful, very lengthy process, but we are there.”

As for Southampton County’s Commonwealth Attorney and Clerk of the Circuit Court offices, which Franklin also shares, the city is offering the use of its Franklin Business Center at 601 N. Mechanic St. — specifically a 1,300-square-foot space formerly occupied by Parallax Information Technology and a 1,100-square-foot space used by a counseling service, which will be moving out in February.

Glavé & Holmes, the county’s project architect, estimates the renovation in Courtland will cost $15.69 million. The city of Franklin will be on the hook for just over 21% ($3.4 million) of that figure based on its population relative to the county’s and the precise amount of square footage it will share with the county in the completed building.

Franklin is also obligated to fund a portion of the relocation costs during construction, but by offering Southampton County space in the business center and charging the county rent, the city will “in essence, be paying ourselves,” Jarratt told members of Franklin’s City Council Jan. 11.

When presented with the alternative of placing trailers outside the county’s administration building in Courtland — and having to foot at least part of the cost of doing so — the council members voted unanimously in favor of offering the Business Center.

Renovating and expanding the 23,000-square-foot Main Street courthouse will entail demolishing nearly every part of the existing structure, save for the original circa-1834 building and a 1960s addition. According to Glavé & Holmes’ architectural plans, the city will share 27,190 of the expanded building’s 40,158 square feet.

The new facility is to open January 2023. 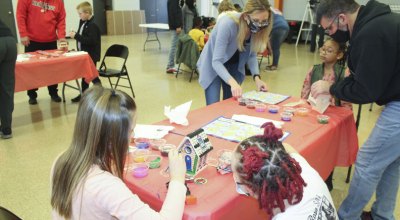