A Capron man and Newsoms woman have each been charged with felonious sexual assault, which allegedly took place against another woman on Dec. 30, 2020, in the 22000 block of Harvest Drive in Franklin. In a statement to The Tidewater News, Maj. Camden Cobb of the Southampton County Sheriff’s Office said that deputies were notified to investigate the complaint on Jan. 6. Detectives got warrants against Colby Paul Kirkland, 24, and Makayla Brown, 19.

Kirkland is specifically charged with aggravated sexual battery: victim was incapacitated; abduction of a person with intent to defile; and two misdemeanor counts of buying alcohol for underage people.

According to documents obtained by the county’s General District Court office, he was arrested on Jan. 7, taken to the county jail and released on a $25,000 bond on Jan. 15. 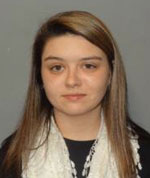 Brown is specifically charged with conspiracy to commit felonious aggravated sexual battery: victim was incapacitated; abduction of a person with intent to defile; and a misdemeanor charge of assault and battery. Court documents show she was arrested on Jan. 12, taken to the jail, and posted a $10,000 bond that same day.

Cobb stated that the case remains under investigation.