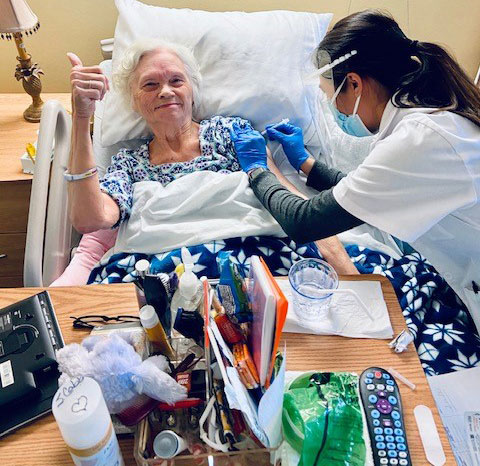 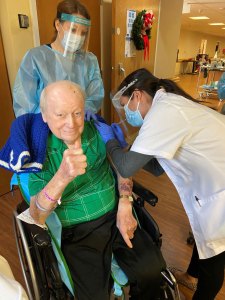 George Hedgepeth receives his first COVID-19 vaccination from a Walgreens pharmacist. Behind them is Deanna Crutchfield, RN.

The majority of residents in East Pavilion at Bon Secours Southampton Medical Center have received the first of two Pfizer vaccinations against COVID-19. Pharmacists from Walgreens are administering the treatment.

“It was a very positive,” said Esther Francis, director of the long-term care facility in Franklin. “We had almost 100 percent participation by our residents [staff have been vaccinated already] — it was not mandatory. Some have opted to take a wait-and-see approach and see how other people reacted.”

Francis added that the local health department came to observe, and the hospital staff monitored that there were no major side effects. At most, some recipients experienced sore arms for a while.

The second dose is scheduled to be given 21 days after the initial one. There will be a third visit for residents who had, for whatever reason, not gotten their first shot.

She also said that there were tears of joy in the eyes of some residents on getting their vaccinations.

“We had been locked down since March 9 last year,” said Francis. “There’s light at tunnel’s end.”