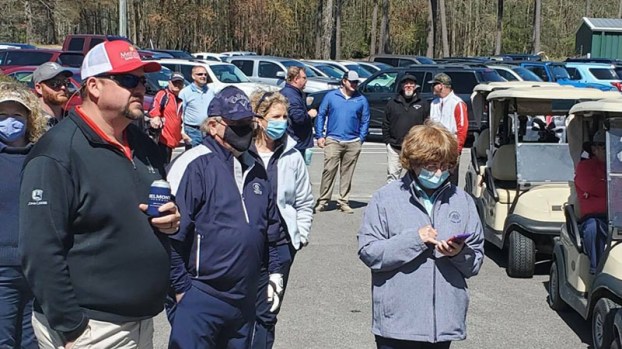 The Child Abuse Prevention Golf Tournament drew its largest turnout ever Saturday, April 3, in Franklin as 76 people participated in the annual event's ninth edition. Pictured in the foreground at the tourney are, from left, Wesley Story, Jeff Mundell, Rena Keogh, who is just behind Mundell, and Marily Johnston. (SUBMITTED | JOSH A. WYCHE SR.)

The ninth annual Child Abuse Prevention Golf Tournament was the most successful yet, with 76 players divided into 19 teams competing on a beautiful Saturday, April 3, at Cypress Cove Country Club in Franklin.

Southampton County Department of Social Services Director Michelle D. Stivers and Family Services Specialist Cindy Moore were part of a committee that organized the event, and they took some time Friday, April 9, to reflect on how it went.

“I think it went great,” Stivers said. “I think we both feel that it went very well — largest turnout we’ve had in the nine years we’ve had it.”

She affirmed a contributing factor to the turnout was likely the limited opportunities people had to get out of the house to participate in activities over the past year due to the COVID-19 pandemic.

“I even had some of the golfers tell me that they were ready to get out and do something, so I definitely think that that played a part in it,” Stivers said.

Moore highlighted how the pandemic significantly influenced the orchestration of the tournament.

“We took a lot of safety precautions due to COVID as far as the layout and how we ran things in an attempt to keep everybody socially distanced and safe,” she said.

“We still have some money yet to collect, but once all the money is collected, we are looking at right below $14,000 this year,” she said. “That is a record.”

Tracing the origins of the tournament, Stivers pointed to her husband, Jerry Stivers, and a nearby civic club.

“He used to be a member of the Joyner-Gray-Yale Ruritan Club, and they’re always looking for activities to help with as well, so that’s how it initially started,” she said. “And my husband has cooked for us every year, so he does the meal that we serve after the tournament.”

Prior to the 18-hole tourney, participants had the option to partake in biscuits from McDonald’s, and box lunches were donated from Subway.

“He was a big help to us as well, so we’ve got lots of good partners in the community and lots of help with the tournament,” she said.

The event’s first-ever hole in one was achieved this year by Jordan Francis. For hitting the shot, he won a trip to the Fiesta Bowl in January and a chance at a million dollars.

Moore said organizers already have a date set for the 10th annual edition of the event — April 9, 2022. In the event of inclement weather, the rain date will be April 16, 2022.