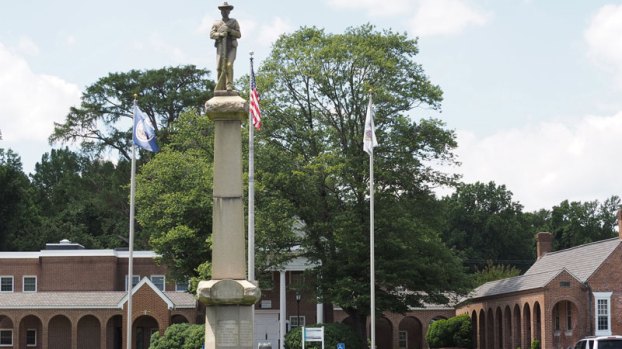 Isle of Wight County's Confederate monument will be deeded to county resident Volpe Boykin and move to the southern end of the county per an April 15 vote by the Board of Supervisors. Stephen Faleski | The Tidewater News

Within the next 90 days, Isle of Wight’s Confederate monument will be moving to land in the southern end of the county owned by Volpe Boykin.

Isle of Wight County’s Board of Supervisors voted unanimously April 15 to deed the monument to Boykin and reimburse him up to $32,500 for the cost of moving it to land he owns at 28304 Walters Highway.

Boykin and his wife, Jennifer, were the only ones to submit a proposal during the state-mandated 30-day window for museums and organizations to express an interest in taking the monument, following the board’s Feb. 18 vote to relocate it from outside the county’s government complex, where it’s stood for the past 115 years.

Per Boykin’s proposal, he’s estimating a cost of $25,000 to disassemble the monument and re-erect it on his land, plus an additional $3,000 to $5,000 to construct a concrete foundation to support it, and another $2,500 to construct an access driveway.

The proposal includes a security plan for lighting, cameras and a secured entrance, but per the terms of the agreement, “Anything above $32,500 we pay out of our pocket,” Boykin said.

The address is for an 84.6-acre parcel zoned for rural agricultural conservation, located at the intersection of Walters Highway and Burdette Road. Currently it consists of farmland and forestry.

“We’ve heard from our citizens; it’s been a long process,” said Newport District Supervisor William McCarty. “For all intents and purposes, this is the right thing to do.”

“I want to commend the Isle of Wight citizens in how they’ve been patient,” added Carrsville District Supervisor Don Rosie. “I think it says a lot for how we handle things in our community.”

The final vote comes more than seven months after a Sept. 3, 2020, public hearing on the matter, which drew a nearly even split of speakers for and against removal, and on the heels of a Feb. 9 vote by Windsor’s Town Council rejecting a proposal to move it to the town’s cemetery.

Moving the monument to Windsor’s cemetery had been the No. 1 recommendation of an eight-member task force the county had formed last October for the purpose of evaluating potential relocation sites, which Boykin served on. Moving it to Boykin’s land was the group’s second choice.

Changes to state law, which took effect July 1 last year, now permit localities to remove, relocate, cover or contextualize any Confederate monuments they own. Since that date, a number of Hampton Roads localities have opted to remove them from public parks, thoroughfares and courthouse grounds.

County residents who had lobbied for the monument’s removal from county grounds, among them local NAACP Chapter President Valerie Butler, argue it glorifies the Confederacy and white supremacy. Others who had lobbied for it to remain where it stands are of the opinion that removing it would be tantamount to erasing history.

“I am glad this issue is resolved and it will be relocated,” Butler said. “The right thing to do was to remove it from the Courthouse Complex.

Per the terms of the agreement, the monument will remain county property until the day it is relocated to Boykin’s land.