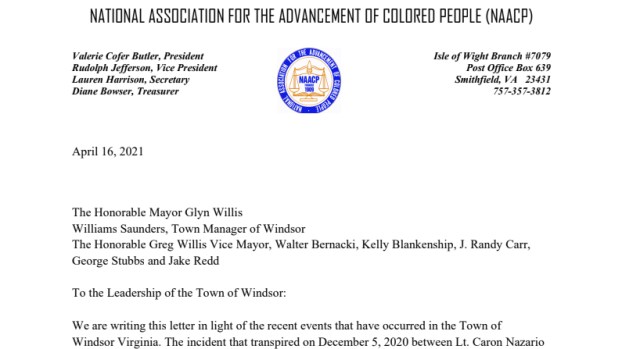 The Isle of Wight County NAACP has written a formal letter to Windsor's Town Council and town manager detailing its reasons for demanding the resignation or termination of Police Chief Rodney "Dan" Riddle and Officer Daniel Crocker. Submitted

Isle of Wight County’s NAACP chapter on April 16 sent a letter to Windsor town officials explaining in detail why they are calling for Police Chief Rodney “Dan” Riddle and Officer Daniel Crocker to resign or be fired.

Isle of Wight NAACP President Valerie Butler said she was “appalled” by statements Riddle made at an April 14 press conference in defense of two officers who held Army 2nd Lt. Caron Nazario at gunpoint during a traffic stop last December.

Video footage of the incident, which made national headlines over the past week, shows officers Crocker and Joe Gutierrez exiting their patrol cars and approaching Nazario’s vehicle with guns drawn after pulling him over. Gutierrez, who is seen on video telling Nazario he “should be” afraid to exit his vehicle and later pepper-sprays him, was fired last Sunday, but Crocker remains on the force.

“Officer Crocker ‘immediately’ escalated this situation by radioing to the dispatcher that this was a ‘high-risk traffic stop’ and that the driver was ‘eluding police’; only to later admit in a written report that Lt. Nazario was traveling at a low rate of speed,” Butler writes.

She then states Crocker further escalated the situation by drawing his gun and standing by idly as Gutierrez taunts Nazario and pepper-sprays him, and would later join in with Gutierrez in using “unnecessary physical force.”

“If this brief summary of the facts does not constitute immediate grounds for termination,” Butler writes, “Then we just ask the Town of Windsor and its officials, what does?”

Throughout the process, Riddle has been “complicit in this entire situation,” Butler writes.

During his press conference, Riddle “admitted the only reason he terminated Officer Gutierrez was due to the video going viral,” Butler writes. “This leads our community to wonder if any disciplinary actions that were taken against the officers on January 28, 2021, as originally stated by the Chief of Police.”

“Instead of taking full responsibility for the actions of these officers — as a leader should — Chief Riddle chooses to invoke favoritism by letting the community know of his longtime personal ties with Officer Crocker,” Butler writes.

“Many African Americans and other allies have lost complete confidence in the Town of Windsor and the Police Department due to their handling of this case,” Butler writes. “For the aforementioned reasons and many others, we are immediately calling for the resignations or terminations of Chief Rodney Riddle and Officer Daniel Crocker.”

“The nation is watching as this situation unfolds,” she adds. “Let us be abundantly clear, this Chapter of the NAACP will not stand by ‘idly’ as oppression and injustice occur to Army Lt. Caron Nazario and the Citizens of Windsor.”

The letter concludes by requesting the release of the police department’s newly-implemented January 2021 department-wide training manual, a timeline for implementing a citizens review board and the hiring of an active-duty African American patrol officer.

It is signed by Butler and Brandon Randleman, advocacy advisor to the Isle of Wight NAACP. Chief Riddle, state Sen. L. Louise Lucas and state Del. Emily Brewer are listed as having also received a copy.