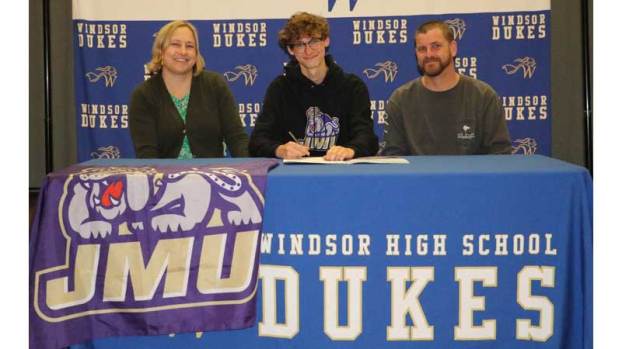 Rylan Farey has developed an impressive ability to perform on stage during his years at Windsor High School, and those efforts created the opportunity to hone those skills at the collegiate level.

With his family and coach on hand April 20 at the high school, Farey participated in a signing ceremony highlighting how he has successfully earned a spot in James Madison University’s theater program.

“It’s an awesome program, and it’s not easy to get into at all,” Windsor theater teacher Virginia Beatty said.

Farey indicated that being in a position to sign with JMU’s program meant everything to him. This perspective represented a significant shift from the one he had at the beginning of his journey in the performing arts. He noted that when he first started in theater, he did not think he would get into it.

“I got in high school, wanted to do (theater) for fun just to see what I could do in freshman year, and then being able to do it competitively, and now, yep, going on to do it broader, hopefully even after college (I’ll) go to the highest of heights,” he said. “It means everything to me, honestly.”

“It’s easily one of the most competitive things I’ve done,” said Farey, who has also represented Windsor well on the soccer field.

He began competitive forensics as a sophomore and made it to states that year and every year after.

To get into the James Madison program, Farey had to perform at a high level in a variety of different ways on what ended up being an eight-hour Zoom call, interrupted by a couple breaks during the course of the day.

“Normally you would go to JMU and go through a whole day of auditions in person,” he said, but the COVID-19 pandemic changed the process.

At first, Farey tried out for musical theater at James Madison but then realized he could just hone in on theater and focus more on film opportunities.

During the day of auditions for the university, he would learn a monologue, do the best he could to memorize it and then try to perform it on video, a task that he said is sometimes difficult.

“That may have somewhat helped my chances with maybe some people shying away from being on video, but I’m like, ‘That’s fine,’” Farey said. “No point in that turning me away.”

He had to perform a monologue, sing an up-tempo song and a ballad, dance, and do interviews on that day of auditions.

Farey described what his theater major will be like at James Madison and what he wants to do with his education after college.

“It’s focusing on the stage aspects, so it’s everything that I’ve been doing up to this point but just on a more complicated scale, I suppose,” he said. “And then (I’ll) hopefully see what I can add to it film-wise, because I do love the stage, and it’s one of my things, but I think one of my dreams is to be on TV and see what I can do in the film industry.”

He expressed gratitude to Beatty for her help over the last four years, including aiding his preparation for James Madison.

“She held my hand through the entire audition process, helped me out so much,” he said.

Beatty said, “He’s a natural talent. He didn’t need that much help.”

Farey also thanked his family for supporting him.

His father, Jay Farey, said it was amazing to see his son sign.

“He’s always had the determination, and he’s smart enough, that’s for sure,” Jay Farey said. “He loves school. Since day one, he’s always loved school. So, he deserves it. It’s amazing to see him achieve what he’s bent on achieving, and now he’s going to go far and do a lot better than me, and that’s good.”

Rylan’s mother, Ailee Farey, said, “I’m so proud of him. It was nothing we pushed. Of course, we supported him, but once he realized it was something he loved and he could do it well, we just tried to do everything we could.”

Rylan praised his younger brother, Hadley, for helping him learn lines, and he also praised all of his friends, who have been crucial sources of encouragement to him.

“When I started, I walked in, and I was like, ‘Goodness, me. I don’t think I can do this. This is not for me,’” he said, recalling his first day in theater as a high school freshman. “And then I had awesome people just be like, ‘Hey, man, just give it a shot,’ and they just helped me all the way through, all the seniors, everybody, honestly.”

Rylan observed that, ultimately, theater gave him an outlet to develop strengths he has possessed since he was a child.

“I guess I never really shied away, I would always do things in public to make people laugh all the time, so I was like, if I could do it on the stage and entertain people in a public setting, why not?” he said. “Singing is fun, making people laugh is one of the best things I can do. Just seeing everybody laugh at my jokes or even me acting silly on stage, it’s awesome. It just makes me smile every time.”