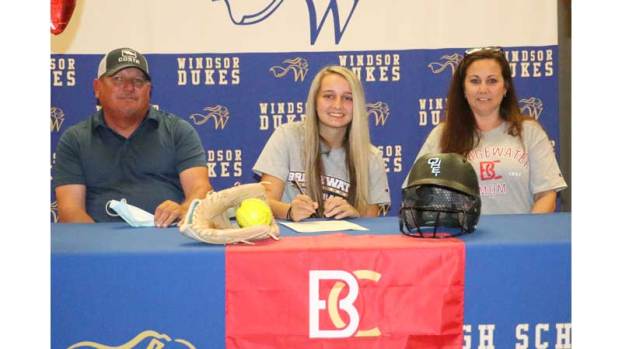 Windsor High School senior shortstop Whitlee Hughes, center, signs to play softball for Bridgewater College during an April 20 ceremony in Windsor. Pictured with her are her parents, Thomas and Amy Hughes. (Photo by Titus Mohler)

Hughes signs to play for Bridgewater

A signing ceremony April 20 at Windsor High School commemorated the fulfillment of a dream Whitlee Hughes has been pursuing for nearly a decade.

With family, friends and coaches looking on, the Lady Dukes senior shortstop formalized her commitment to play softball at the collegiate level by signing with Bridgewater College.

Hughes has been part of the Windsor High School softball program since eighth grade. She played for the junior varsity team for two years and has been a member of the varsity program since her sophomore season.

Brooke Sutphin, head coach of the Windsor varsity team, said it was an honor to see Hughes sign to continue her playing career at the next level.

“I knew since eighth grade that she had the talent to go anywhere that she wanted to go play ball,” Sutphin said. “I’m very proud of her, and I wish her good luck the rest of her journey. I’ve been a little part of it, but it’s been an honor.”

Asked what Hughes will bring to the Bridgewater softball program, Sutphin said, “Leadership, the ability to play any position that they put her at. She’s going to show up. She’s dependable.  I count on her.”

Hughes noted being poised to do whatever Bridgewater Eagles Head Coach Megan Pleskovic asks of her.

“I’m going to be a utility player there, so I’ll play everywhere,” Hughes said. “Wherever she puts me, I’ll play.”

There were other college options Hughes evaluated prior to making her commitment, but she explained why Bridgewater became her ultimate choice.

“Bridgewater is like Windsor, basically,” she said. “It looks like a town, it’s very small. It’s just something that I was very interested in. I think the softball coach at Bridgewater was the biggest thing for me, though, that made me decide (on) that school.”

During the ceremony, Hughes was flanked by her parents, Amy and Thomas Hughes.

“It’s exciting, it’s rewarding, it’s humbling — it’s everything,” Amy Hughes said after the ceremony, describing what it meant to see Whitlee take this big step. “She’s been playing, actually, since she was 9 years old. To get this far and to stick with it and stay dedicated, it’s taken a lot. She’s a heck of an athlete too, so it makes us proud.”

At Bridgewater, Whitlee plans to major in health and exercise science while minoring in coaching.

“I’ll probably do coaching for high school and then maybe go up bigger from that to college, but athletic trainer is what I want to do as my career,” she said.

For helping her reach her current level of achievement, she offered thanks to her family, her school ball coaches, Tracy Carr and Sutphin, her travel ball coaches, Eric Thompson and Nicole McGowan, and her teammates, with specific mention made of Windsor’s Maja Angle and Sydney Turner.