CAPRON – Edna Williams Hodges, 89, passed away on May 5, 2021 in East Pavilion. She was born on Dec. 6, 1931 in Broadnax, Virginia and was the daughter of the late George Allen Hall and Mary Dunn Hall. She was also predeceased by her first husband, A. Clifton Williams and two brothers, Buck and Mike Hall. 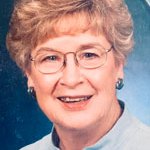 Edna was a graduate of William and Mary College and a member of Capron Baptist Church.

A funeral service will be held at 2 p.m. on Saturday, May 8 in Wright Funeral Home with Pastor Ron Carr officiating. Burial will follow in Capron Cemetery. The family will receive friends one hour prior to the service in the funeral home and suggests that memorial donations be made to Capron Baptist Church or East Pavilion Activity Fund.

Southampton Memorial Hospital to return to network for Anthem