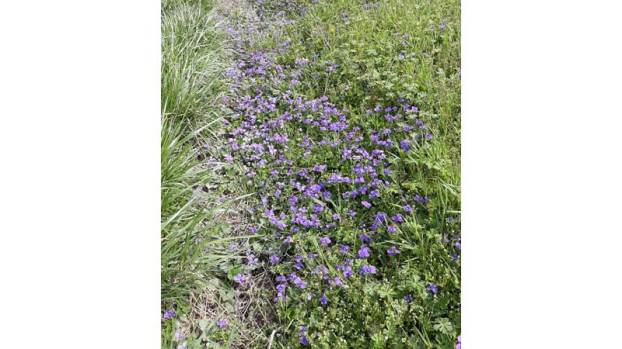 Wild violets are often considered a weed in turf grass and lawns. They spread by seeds and rhizomes and may be a pest if a manicured lawn is the goal. (Photo submitted)

The idiom “shrinking violet,” has been in use since at least the early 1800s. At first, it was used to refer to the actual wild flower that often grows in shady spots, tucked into nooks and crannies and bearing flowers that seem to hide among its leaves. By the midcentury, use of the term was expanded to include reference to a shy, modest individual. For many of us, we would add another phrase — a harbinger of spring. The native violets are a welcomed early sign of spring in late February and early March; and unless you are taking a stroll, you may hardly notice the blooms peeking out of the debris left over from winter.

The common blue violet (Viola sororia) seems to have been anything but “shrinking” this spring. Along some of the routes I frequently travel, two large patches caught my attention in late March. One patch was on a ditch bank along the Central Hill Road not far from the Isle of Wight Courthouse. On a bright sunny day, the patch was hard to miss. The second sighting was along Peanut Drive just down from where that road intersects with the Central Hill Road. A ribbon of blue violets seemed to flow down the center of a ditch. It was so striking that I pulled into a driveway and walked over to gaze at the awesome sight. Neither patch was visible for much over a week, being swallowed up by fast-growing grasses and weeds.

Wild violets are often considered a weed in turf grass and lawns. They spread by seeds and rhizomes and may be a pest if a manicured lawn is the goal. While generally not a showy plant, violets have a purpose in the local ecosystem. Violets are host to 27 species of native caterpillars, including three species of fritillary butterflies. A small structure attached to the seeds contains fats and protein. Ants use these structures as a food source and transport them to their nests, thus helping to disperse seeds. The flowers attract bees and other pollinators, and the seeds attract game birds. Native violets can be blue, white or purple. They grow in sun or shade and, while preferring moist soils, will grow with average conditions. The plants can make an attractive ground cover.

Native violets can be under-appreciated and unnoticed until seen en masse. This year the common blue violet, at times, was anything but shrinking or modest. Oh, the joy of taking a ride on country roads.