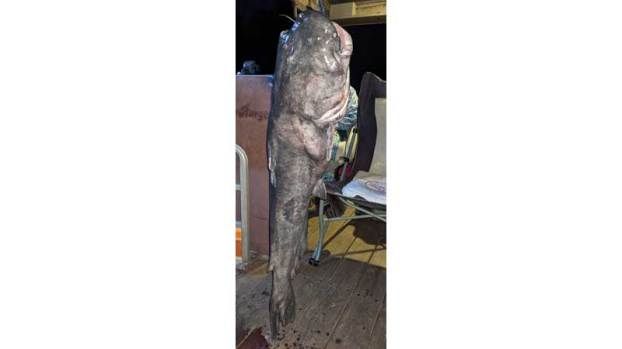 Pictured is the 21-pound catfish Blackwater Nottoway RiverGuard Jeff Turner caught recently that he noted was deformed and sick-looking. (Photo by Jeff Turner)

Whispering Bear and I spent the 23rd through the 25th on the Nottoway below Delaware. The water was low and nasty. Air temps ranged from 60 to 85 degrees. Trash was light, and we only picked up a few items and two mylar balloons.

We did come upon a sight that I hate to see. A limbline, that was not checked daily as it should be, killed a 20-pound catfish, and then the turtles got to it. It is a line I had previously reported to the Virginia Department of Wildlife Resources but obviously was too late for the catfish.

Speaking of fish, the fishing was pretty good actually for the water to be so low. I caught plenty of small bass and only two catfish, but one was 21 pounds. However, that big cat was really sick-looking. There was definitely something wrong with it. It had a head fitting for a 35-pounder, but its body was really puny. Whispering Bear thought it might be a Zombie Cat, and it might have been — I just hope we don’t see any more like that. Both cats were caught using my magical, mystical big catzilla rig using Jack for bait.

We saw a bunch of wildlife on critter patrol this trip. A bald eagle, osprey, snapping and regular turtles, beaver, great blue heron, an egret or white heron, not sure, and lots of warblers that seemed to be looking for love, ducks and a snake bird. Ah yes, the snakes were still getting it on also.

Reckless boating seemed to be abundant on this trip. We saw the same big bass boat twice come busting around curves going at least 60 mph and sliding way out into the curve. Very glad no one was in those curves with him that day. Then we witnessed two ski boats and two Jet Skis come through all the No Wake Zones in that section of the river where Jack Stutts lives. I remember there was a time he would jump in his car and go to the boat landing and write them a ticket for doing that.

Anyway, it was a good trip for the first pontoon patrol of the year and Whispering Bear’s first 3-day pontoon excursion. She did pretty good considering it was kind of chilly that Monday night. Hopefully by next time we get out there, we will have received a goodly amount of rain to flush out the two rivers we call the Nottoway and Blackwater.

JEFF TURNER is the Blackwater Nottoway RiverGuard. To contact him about river issues, email him at blknotkpr@earthlink.net.