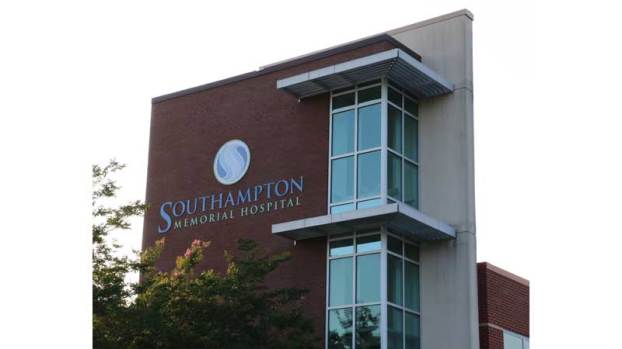 Southampton Memorial Hospital to return to network for Anthem

Southampton Memorial Hospital in Franklin, along with two other Bon Secours hospitals in the region, will return to being an in-network provider for Anthem health insurance plans beginning July 1.

“Access to quality health care services is really vital for our community members, and we’re glad to have reached a new agreement that protects our patients’ access to care in their communities,” Bon Secours Director of Public Relations Emma Swann said June 21.

As The Tidewater News previously reported, Bon Secours Mercy Health, which purchased Southampton Memorial Hospital in 2019, confirmed in December that the Catholic health care system and Anthem had been renegotiating to remain in network for Anthem Blue Cross Blue Shield beneficiaries but failed to reach an agreement by the date its previous contract terminated — Dec. 1, 2020.

This expiring contract impacted all Anthem product lines at all three aforementioned Bon Secours hospitals. All other Bon Secours hospitals were unaffected and remained in-network providers. Medicare and Medicaid plans were impacted, though some Anthem members may have had out-of-network benefits, Bon Secours spokeswoman Jenna Green indicated at the time.

“We totally understand that Anthem maintaining us out of network for the last six months was difficult for our patients with Anthem insurance,” Swann said, “but by advocating for fair market rates, we advocated for the citizens of our community to have access to high-quality health care in their neighborhood.

“And at Bon Secours, our goal is to have long-term agreements with all major payers, including Anthem, so that our patients can have easy access to quality care,” she continued. “So that’s why we worked so diligently to resolve the situation for the good of the community, and we just really thank them for their patience throughout this process.”

Swann said the Anthem contracts for Southampton Memorial and the other two hospitals will last through 2024, which she noted is fairly long term for managed care contracts.

Green confirmed in December that contract renegotiations had been initiated at Bon Secours’ request on its belief that “Anthem’s current reimbursement to these hospitals is not sustainable or market competitive.” Scott Golden, a spokesman for Anthem, agreed then that a “fair reimbursement rate” to the three hospitals was “the sticking point” of the negotiations but claimed the reimbursements Bon Secours had requested “would significantly increase health care costs” for patients at the three affected hospitals.

As The Tidewater News also previously reported, in a frequently asked questions section on its website, Bon Secours denied wanting to raise health care prices at the affected hospitals, instead reiterating its claim that the reason negotiations broke down was because Anthem’s then-current reimbursement to the three hospitals was not “not market competitive” and “not sustainable.”

Swann affirmed that Anthem was ultimately able to accommodate the request for rates that were market competitive and sustainable.

“Yes,” she said June 21. “We’re really glad that we reached this agreement with them and that these three hospitals will be in network for these communities effective about two weeks from now.”

Also on June 21, Golden stated that while Anthem does not discuss details of its provider agreements, he confirmed the three aforementioned hospitals’ return to Anthem Blue Cross and Blue Shield’s provider networks effective July 1.

“Prioritizing the health of our communities is important, which is why we are pleased to have reached an agreement that protects affordability and ensures our members to have access to quality care at Bon Secours Mercy Health Southern Virginia Regional Medical Center, Bon Secours Southside Regional Medical Center and Bon Secours Southampton Memorial Hospital,” he stated. “We value our continued partnership with Bon Secours Mercy Health as we work together to improve lives and communities here in Virginia.”

Swann pointed to diligence to resolve the situation for the good of the community as the key to making the new agreement a reality.

“We’re the only faith-based health system in Virginia, and we really do live out our mission to bring good help to those in need, and throughout this whole process, we’ve remained focused on investing in the health and the well-being of Virginians that we serve, while we’re also ensuring that Bon Secours is a place where associates want to work, clinicians want to practice, people seek wellness and communities can really thrive,” she said.