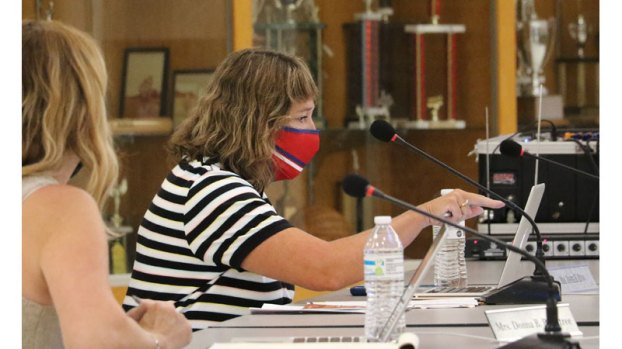 Southampton County School Board member Denise Bunn refers to information on her computer while contributing to the discussion July 12 about the review of existing and updated policies that address transgender students. (Photo by Titus Mohler)

The Southampton County School Board briefly reviewed existing and updated policies that address transgender students during the board’s meeting July 12 while also addressing some public comments made earlier in the meeting by Berlin/Ivor District Supervisor Christopher Cornwell Sr.

Shortly after raising the subject of the policies, Board Chair Dr. Deborah Goodwyn noted, “We will not take action tonight, but it’s there as a first read, and we will take action on the policies in August. According to the Code of Virginia, we do have to have a policy in place before the start of the 2021 school year, but these are there for first read.”

Board member William Worsham, who was participating in the meeting remotely by phone, asked, “The policy we’re looking at right now, has this been codified in the state code?”

During the public comments portion of the meeting, Cornwell addressed the state laws calling for the policy updates, and he also referenced the Virginia Department of Education’s document titled “Model Policies for the Treatment of Transgender Students in Virginia’s Public Schools,” which school divisions are to be consistent with when revising or creating their own policies.

“Consider and respect the desires of the majority when making your decisions here tonight,” Cornwell said. “On July 7th, the Warren County School Board voted to reject the Virginia Department of Education and their preposterous mandates regarding the treatment of transgender students.

“The Lee County School Board superintendent, Brian Dean, said, ‘We do not have to approve the model policy if the division has policies consistent with the new state law. In our opinion, we have met the law without adopting model policies,’” Cornwell continued.

He said Isle of Wight County did very much the same thing.

“As we’ve all heard said before, ‘You’ve got to stand for something or you’ll fall for anything,’” Cornwell said to board members. “Well, it’s time for y’all to stand up. Stand up for these children, stand up for these teachers. They’re counting on you to actually do the right thing this time.

“‘The Model Policies for the Treatment of Transgender Students in Virginia’s Public Schools,’ all 26 pages, all 9,919 words of it, House Bill 145, Senate Bill 161 — have you truly read any of it?” he asked. “I implore you this evening to actually read them.”

He stated that he has done so.

“Yes, some of these are hard questions, but that’s your job, and the children of this county deserve it,” he added. “If you’re not up for the job, maybe you should just step aside and make room for somebody else who’s willing to ask those difficult questions.”

A link to the VDOE’s model policies can be found in the second paragraph down at www.doe.virginia.gov/support/gender-diversity/.

Following is one of the model policies found within the VDOE’s document: “Schools shall eliminate the practice of segregating students by gender to the extent possible.

“For any school program, event, or activity, including extra-curricular activities that are segregated by gender, [School Division] shall allow students to participate in a manner consistent with their gender identity.”

This model policy does not apply to a great deal of public school sports, though, as it continues by stating, “Athletic participation regulated by the Virginia High School League (VHSL) or another organization such as the Virginia Scholastic Rowing Association (VASRA), as well as middle school athletics, shall be in compliance with policies and rules outlined by those organizations.”

Another VDOE model policy states, “Access to facilities such as restrooms and locker rooms that correspond to a student’s gender identity shall be available to all students.

“Upon request, single-user or gender-inclusive facilities or other reasonable alternatives shall be made available to any student who seeks privacy. Any options offered shall be non-stigmatizing and minimize lost instructional time.”

One of the VDOE model policies addresses name and pronoun usage by school staff and students: “Schools shall allow students to use a name and gender pronouns that reflect their gender identity without any substantiating evidence. School staff shall, at the request of a student or parent, when using a name or pronoun to address the student, use the name and pronoun that correspond to their gender identity.”

The VDOE document provides rationale for this model policy by noting that research — the sources for which were cited — has shown that transgender youth with supportive families experience a 52% decrease in recent suicidal thoughts and 46% decrease in suicide attempts and that a “chosen name used in more contexts was associated with lower depression, suicidal ideation and suicidal behavior.”

During the Southampton County School’s Board’s discussion of its existing and updated policies addressing transgender students, board member Denise Bunn said, “I would like to say I did actually read the law. I read all the policies that are presented to us tonight. I try to come to meetings prepared and make sure that I do understand what we’re going to be voting on, so I have done my homework.

“Within our policies that we’re looking at, what I can tell is that (Virginia School Boards Association) has taken existing policies and simply interjected transgender or gender identity issues within those existing policies,” she continued. “We’re not voting on a new policy set. We’re simply voting on whether or not we’re going to come and put that one piece of verbiage in existing policies.”

“And really, the verbiage is very minimal because VSBA was of the opinion that our existing policies actually were in compliance with the requirement of the General Assembly,” Shannon said.

In the packet of policies presented to board members, Shannon said she put the footnotes in red.

“And those footnotes were some decisions that we might have had to make,” she said. “And as we work through this, we will look at this policy, we’ll go back and look at some of our old policy manuals, and then we’ll make some of those decisions.”