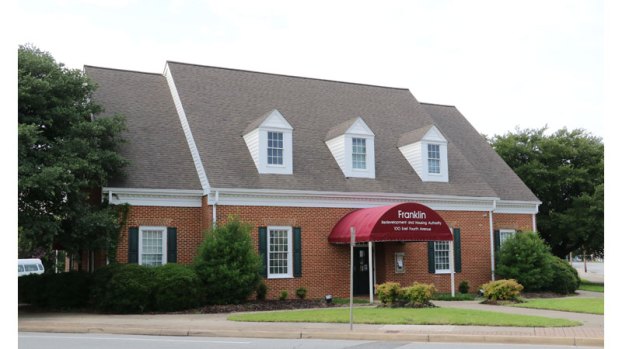 Pictured is the Franklin Redevelopment and Housing Authority building at 100 E. Fourth Ave. that the City of Franklin has acquired, closing on it July 13. The city’s Department of Social Services will be using the building by either the end of this year or the beginning of 2022. (Photo by Titus Mohler)

Franklin’s City Council adopted the resolution and signed the final deed July 12 that allowed the city to close the next day on a building that will be used by the city’s Department of Social Services.

“As you all know, we’ve been working with Franklin Redevelopment and Housing Authority to purchase their building for future use as a social services department,” Franklin City Manager Amanda C. Jarratt said to council members at the council’s July 12 meeting.

This building is located at 100 E. Fourth Ave. in Franklin.

“I’m pleased to report that we have all of the necessary documents for us to be able to close tomorrow, and so you all will need to adopt the resolution that’s before you this evening,” Jarrett continued. “And we have the final deed that we will sign this evening once the meeting’s over as well as this resolution so that staff and the housing authority legal representation can be ready to close tomorrow.”

On July 19, Jarrett confirmed the city closed on the building July 13 as expected.

Jarratt had previously said that once the sale of the building was finalized, the transition would likely take several months, noting the actual move probably would not happen until the end of the year.

She confirmed July 19 that now that the sale of the building has been finalized, the timetable is largely as anticipated, with the move likely to happen at the “end of this year or first of next.”

As The Tidewater News previously reported, the City Council voted 6-1 on April 26 to appropriate $430,000 from its unassigned fund balance to purchase the former bank building at 100 E. Fourth Ave. from the Franklin Redevelopment and Housing Authority. McLemore was the dissenting vote and the abstaining one on a subsequent 6-0 vote to allow the city to reimburse itself for the $430,000 out-of-pocket expense once the financing is completed.