Narrow-leaf Mountain-mint is most attractive, easy to grow 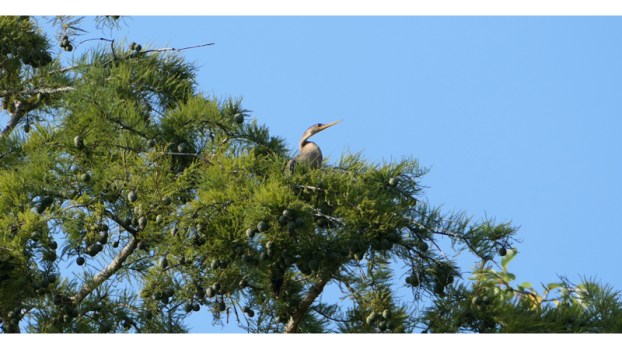 Pictured in the tree is an anhinga, also known as a snakebird or water turkey. This is only the second one Blackwater Nottoway RiverGuard Jeff Turner has ever seen on the rivers. (Photo by Jeff Turner)

Attack of the alligator weed

Whispering Bear, Spirit of Moonpie and I spent Aug. 8 through Aug. 10 on the Blackwater below Franklin. The water was clear and a tiny bit high from the normal level. I saw no water quality issues. Air temps ranged from 68 to 90 degrees, and it was hot.

The trash on this trip was pretty bad, as I had suspected it would be. Lots of rain usually means lots of trash downriver from Franklin. We picked up what we could, but there was so much we could not get to in the pontoon boat. We picked up 20 pounds.

We didn’t really see that much wildlife on this trip, too hot, I guess. I did get a picture, though, on the last day, of an anhinga, also known as a snakebird or water turkey. This is only the second one I have seen on our rivers.

The plant life along the river was putting out pretty well, making for some cool pictures on this patrol. We even found a red bay — kind of rare around here. Sadly, a friend of mine told me there is a laurel wilt that is moving through the country this way and is killing off trees like this in the laurel family, which also includes sassafras. And as my friend, J.B., stated “It’s going to be a real shame to lose those trees.”

The fishing on this trip was not so hot like the weather was. We caught 13- and 7-pound blue cats the first night. The second night we were skunked because the water wouldn’t move, and I could not deploy the monster cat rig. The water didn’t start to run until about midnight, and Whispering Bear and Spirit of Moonpie were getting ready to threaten mutiny if I hadn’t called it a night.

During the day I caught a few small bass casting and a few jack to take home to eat, but I fished really hard for those few fish. Whispering Bear caught a couple of bream, but all in all it was pretty slow, I’m guessing from all that fresh water influx from all that rain.

Yep, the alligator weed I had killed back a couple years ago has returned and now has exceeded the amount that was in the river back then. I was actually quite stunned at how much I saw. Some of it is in large floating mats, which will cause it to spread even more rapidly. It’s only a matter of time before it hitches a ride on someone’s boat and makes it into the Nottoway if it’s not there already and I just ain’t seen it yet.

Oh well, at least it’s just the weed and not the gators invading the two rivers we call the Blackwater and Nottoway.

JEFF TURNER is the Blackwater Nottoway RiverGuard. To contact him about river issues, send him an email at blknotkpr@earthlink.net.