Attack of the alligator weed 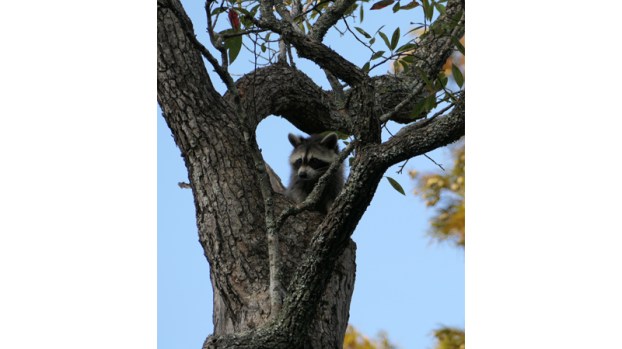 Pictured is Sleepy Head the Raccoon, which Blackwater Nottoway RiverGuard Jeff Turner saw during his Sept. 4-6 stay on the Blackwater below Franklin. (Photo submitted by Jeff Turner)

Whispering Bear, Spirit of Moonpie and I spent Sept. 4-6 on the Blackwater below Franklin. The water was clear and in good shape. I saw no water quality issues. Air temps ranged from 68 to 88 degrees, and the humidity was down, so that was nice. The skeeters however were not nice and ’bout carried us away both evenings at dusk.

The trash on this trip was not too bad; we picked up only about 10 pounds worth. We did, however, collect two more styrofoam blocks that are still coming out of the Franklin canal all these years later. Those blocks were originally traced back to coming from the Tractor Supply in Franklin after a storm, and I now believe that total is up to around 25.

The fishing on this trip was outstanding. We caught lots of bass and bream, but the Jacks were wild. I caught so many chain pickerel I lost count. Got plenty frozen now for some yummy fish fry’s down the road. Most all the bass and jacks were caught on a Mepps with a white tail. We caught only two cats, one each night, with the largest weighing 16.4 pounds.

The Moonpie Critter patrol saw lots of wildlife this outing. We had a real treat when Whispering Bear spotted two little raccoons up in a tree. One looked like it was dead the way it was drooped over a limb, lifeless looking, which got my two girls pretty upset. Luckily, though, as we neared the tree they were in and with some beating and banging on the boat, the little raccoon lifted its head. There was nothing at all wrong with the little feller. He was just sleep… in a most peculiar, contorted manner. After wiping the sleepy bugs out of his eyes, he and his sister gawked at us for a few minutes, and then Sleepy Head flopped right back asleep on another limb, draped over it like a wet dishrag. I guess they were really tired from the night before festivities.

So, I usually don’t go on the river during a holiday like Memorial Day. The rivers are usually really busy, and I usually run into some boaters who don’t respect other boaters on the river. I was pleased that on this trip, except for the one boater that sent his monster wake broadside into us knocking stuff all over the boat, everybody else was very nice, very respectful. Even at the ramp when we came out, it was really busy, which I dread. But everyone there knew what they were doing and loaded in and out in a timely manner that went like clockwork.

That sure was very nice to behold on the two rivers we call the Blackwater and Nottoway.