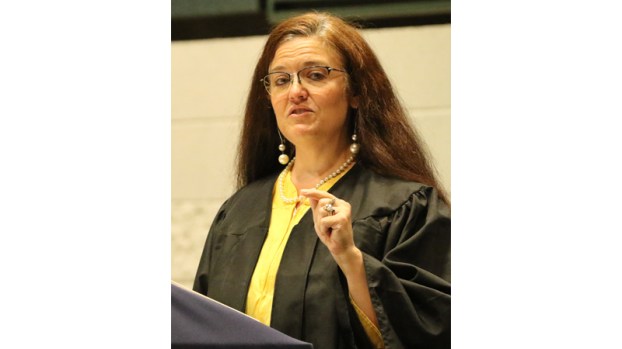 Amy L. Phillips, who represents Ward 2 on the Franklin City School Board, said she reached out to get clarification on what the school board had done with its June 17 policy adoptions. (Photo by Titus Mohler)

Franklin City School Board Chair Amy L. Phillips confirmed to her fellow board members Sept. 16 that the Virginia School Boards Association’s recommended policy updates relevant to the treatment of transgender students, which the board adopted June 17, have the school division in compliance with the law after there had been some uncertainty on the matter.

Her clarification came after a July 30 Virginia Department of Education memo from Superintendent of Public Instruction Dr. James F. Lane cast some doubt on whether minor updates to existing school division policies would be enough to meet the standard of the new state laws.

In his memo, Lane said, “With respect to content of local policies, VDOE’s model policies extend beyond just compliance with nondiscrimination laws to cover matters related to student records, student privacy, bullying and harassment, dress codes and participation in school activities, among others. These topics were statutorily mandated to be included in the VDOE guidance. Therefore, nondiscrimination policies alone may be insufficient to meet the full scope of this legal mandate.”

“The clarification that I had was that adopting the VSBA updates has us legally compliant with the law,” she said. “So we are in compliance with what the state code says now.”

Phillips explained that the VDOE’s “Model Policies for the Treatment of Transgender Students in Virginia’s Public Schools” outlines specific instances and how a school division should conduct itself in those instances.

“So right now my understanding is the model policies are to protect in the event that there is something to where someone is going to sue the school division,” Phillips said. “Now keep in mind, a policy is only as good as the paper it’s written on if you don’t abide by the policy. So if we enacted a policy and it was not followed, you still open yourself up.”

As far as the VDOE’s model policies are concerned, Phillips said that from what she has been able to find, there is nothing that states that Franklin City Public Schools has to adopt them.

“They are exactly what they say — model policies that we can choose to adopt for more definition when it comes to inclusivity of transgender students,” she said.

Ward 6 board member Jerry McCreary, who was the board’s lone vote against the policy adoptions June 17, said, “I think they’ve opened Pandora’s box because the inclusivity they’re claiming to try and protect, they’re actually excluding a lot of people, a lot of opposing beliefs and understanding of reality.”

Phillips said, “My whole reason of bringing (the issue of transgender policies) back before the board was because I wanted to make sure that what we had done had us legally compliant with the state code and the law, and I do have confirmation from VSBA, and they said that through their attorneys — who are (the ones) who suggested the modifications to our existing policies — that those changes do have us legally compliant with the law. So I just wanted to make sure that we all knew and we were all on the same page with that.”