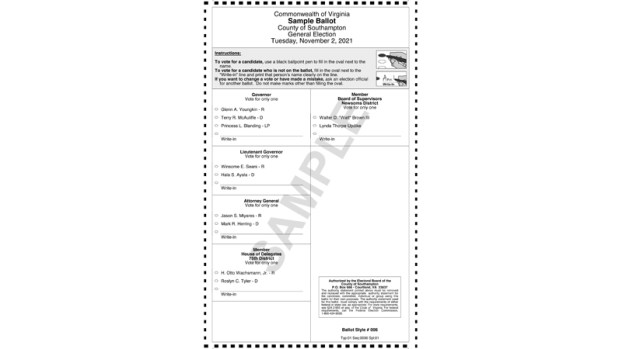 This ballot is an example of the one voters in the Newsoms District will see. That district features the only contested local election. (Submitted by Lynn Burgess)

The Nov. 2 election is underway as early voting began Sept. 17 to decide Virginia’s governor, lieutenant governor, attorney general and 75th District representative in the House of Delegates, along with local elections that include one contested Southampton County Board of Supervisors seat.

In both the City of Franklin and Southampton County, in-person early voting will continue Monday-Friday from 9 a.m.-5 p.m. until Friday, Oct. 29. The respective offices will also be open 9 a.m.-5 p.m. on the last two Saturdays before the election — Oct. 23 and Oct. 30.

The above schedule will be interrupted only once by a holiday, as both the Franklin and county in-person early voting locations will be closed Monday, Oct. 11, in observance of Columbus Day.

For both Franklin and Southampton County, ballot drop-off will be available for the same dates, times and locations listed above for in-person early voting.

Virginians also have the option to vote absentee by mail. To vote this way, voters must complete an application. They can submit it online at the Virginia Department of Elections website — www.elections.virginia.gov/casting-a-ballot/absentee-voting/ — or by requesting an application be mailed to them by calling the Southampton County Registrar’s Office at 757-653-9280 or the Franklin voter registrar at 757-562-8545.

For both Franklin and Southampton County, ballot drop-off will be available on Monday, Nov. 1, from 9 a.m.-5 p.m. Dropboxes will also be available at all regular polling places from 6 a.m.-7 p.m. on Election Day.

For those voting in person, the Virginia Department of Elections indicates a voter will be asked to show one form of approved identification, and it does not necessarily have to include a photo. It could even be a current utility bill, bank statement, government check or paycheck containing the name and address of the voter. Any voter who does not present acceptable identification may instead sign a statement, subject to felony penalties, that they are the named registered voter who they claim to be. Any voter who does not present acceptable identification or sign this statement must vote a provisional ballot.

There are three individuals on the ballot this year who are running for governor: Republican Party candidate Glenn A. Youngkin; Democratic Party candidate Terry R. McAuliffe, who served his first term as governor from 2014-18; and Liberation Party candidate Princess L. Blanding.

More information can be found on these candidates at their respective campaign websites — www.youngkinforgovernor.com, www.terrymcauliffe.com and www.princessblanding.com.

Though the Republican and Democratic parties have established identities, the Liberation Party may be less familiar to some voters.

The 75th District includes Southampton County and the City of Franklin.

The one contested local election is for the Newsoms District seat on the Southampton County Board of Supervisors. Lynda T. Updike is the incumbent, and running against her is Walter D. “Walt” Brown III.

Board of Supervisors candidates running for reelection uncontested include Alan W. Edwards, in the Jerusalem District, and Robert T. White, in the Franklin District.

Robert Chet Poland is running uncontested for a seat on the Boykins Town Council.

For more information on the election, contact Southampton County Registrar Lynn Burgess at (757) 653-9280 or lburgess@southamptoncounty.org, or contact Franklin Voter Registrar Jennifer Maynard at (757) 562-8545 or jmaynard@franklinva.com.