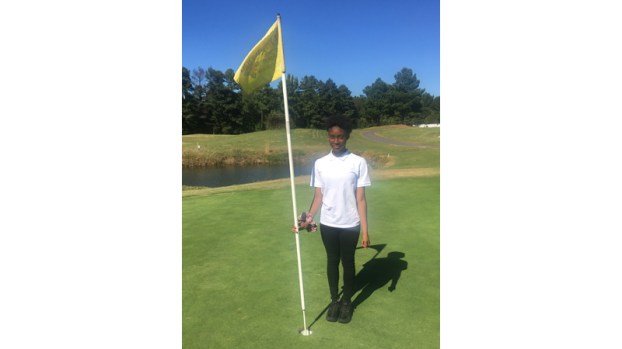 Franklin High School sophomore Ariel Picot stands at the No. 9 hole at Dogwood Trace Golf Course in Petersburg where she hit a hole-in-one during the 2021 Region 1B Tournament on Monday, Sept. 27. (Photo submitted by Mona Sumblin)

The 2021 golf season came to a close for Franklin High School on Monday, Sept. 27, at the Region 1B Tournament in Petersburg, but Broncos sophomore Ariel Picot ensured the year would end with a historic flourish for Franklin when she hit a hole-in-one.

Broncos Head Coach Dennis Sumblin and team communications officer Mona Sumblin said that as far as they know, Picot is the first golfer in the history of the school’s golf program to hit an ace. For that matter, it is also an achievement that many professional golfers have never experienced.

Picot, who is in her second year of playing golf, was on the par-3 No. 9 hole when she hit the ace. Coach Sumblin estimated the hole itself was about 165 yards from where she teed off.

Picot noted she used a 5-iron, and she recalled what was happening right before her swing.

“I was thinking, ‘Just stay down, be calm and just swing all the way through,’” she said.

Mona Sumblin said, “And that’s what (Coach) always tells them — ’Keep your head down.’”

Picot said she was hoping her shot was going to be on the green, but, of course, “I wasn’t expecting it to go in.”

“After I teed off, I was a little nervous, and then once it went in, I was shocked,” she said.

Picot was actually able to see the ball go in from where she was at, giving her the opportunity for an instant reaction.

The Sumblins did not see it, but Mona quickly found out and let Coach Dennis know about it.

Mona Sumblin said only one other Virginia student-athlete, a boy, has hit a hole-in-one this year.

Sharing what it meant to her to have been able to achieve a first for the Franklin golf program, Picot said, “I was excited all over.”

Coach Sumblin said, “Hopefully Ariel hitting that hole-in-one and the excitement that’s coming with it and the notoriety (means) that we could get a few more folks out for golf.”

He said the team ended up with four members this year.

Picot is actually making history in more ways than one. In addition to hitting an ace, she is also one of the first female members of Franklin’s golf program, and she is joined on the team by multiple sisters.

“Ariel and her sisters, Ariana (Picot) and Tianna (Mabry), made FHS history by being the first female siblings to participate in golf at the school,” Mona Sumblin stated.

Sumblin added that in the regional tourney, Jordan Johnson, who led the Franklin team all season, finished with a score of 116, while sisters Ariel Picot and Mabry finished with scores of 130 and 136, respectively.